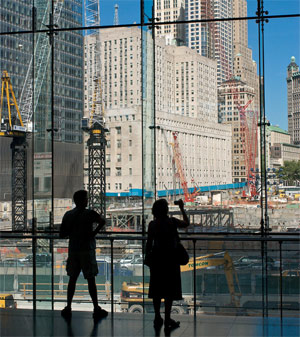 After weeks of anger and public recrimination, the Mayor and families of September 11 victims have come to a compromise about this year's anniversary ceremony. Families will now be able to enter the "pit," which is where the basement of the World Trade Center once stood.

Controversy over the sixth anniversary of the attacks emerged after the mayor and Governor Spitzer sent victims' families a letter saying that the ceremony, held at Ground Zero in previous years, would be moved to Zuccotti Park, stressing that construction prevented them from holding the event there. Many families were upset, claiming that the city was downsizing the attacks and had even filed for a permit to hold a ceremony at Ground Zero. For some reason, the mayor's office didn't realize that families would be upset with the move.

The mother of a firefighter who died at the WTC, Sally Regenhard, described yesterday's meeting with the mayor as "congenial, compassionate and heart-to-heart meeting," and said "This is a very happy day for families that don't have much happiness in their lives."

The Mayor released a statement, saying, "The families proposed a very limited and controlled level of access to the below grade, and after consulting with the Port Authority, we've been told that this type of access can work. We will work with the Port Authority to allow family members to safely descend the ramp in a single file stream that keeps moving into a limited area below grade to pay respects, and to then ascend back to street level." Families will have "several hours of access" to lay flowers, but it's unclear what will happen next year, as construction will be in more advanced stages.