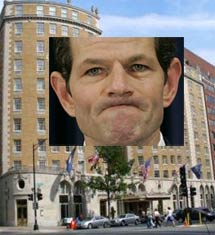 Among the charges noted on former Governor Eliot Spitzer's campaign filings, there were two room charges at the Mayflower Hotel--the very same D.C. hotel when he trysted with an expensive hooker on February 13.

Now, the NY Times says it's "unclear what nights were covered, or whether Mr. Spitzer stayed at the hotel" and Spitzer 2010 spokesperson said, "Every single hotel and airline expense in this filing, as in all filings for Spitzer 2010, was for a legitimate campaign purpose.” But given that Spitzer has the dough, why not just personally assume the charges at the hotel where everyone knows you cheated on your wife and essentially broke the law by having a hooker from NYC cross state lines? We're just saying!

The Times also points out that the possible misuse of campaign funds for time with hookers is what federal prosecutors are considering, if they decide to charge Spitzer. So far, Spitzer 2010 has refunded $1.48 million in campaign contributions.

#Ashley Alexandra Dupre
#eliot spitzer
#hookergate
#mayflower hotel
Do you know the scoop? Comment below or Send us a Tip