After failing to get out of committee last year, the New York State Senate has passed a bill that would allow police officers to better enforce the laws against drivers who kill and maim pedestrians and cyclists.

Hayley & Diego's law (VTL 1146), which was passed in 2010 after a delivery van killed two children in Chinatown, imposes a maximum penalty of 15 days in jail and a $750 fine against drivers who fail to exercise "due care." But the law requires police officers to witness the incident in order to issue a violation. In contrast, the bill passed by the Senate would allow officers to issue citations under VTL 1146 if they have "reasonable cause" to believe a violation was committed. 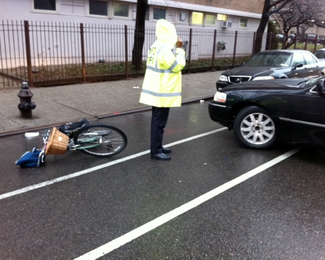 explains that reasonable cause means that "a police officer has enough evidence to believe that someone has violated the law." He points to a case in which a livery cab made an illegal U-turn on Jay Street in Brooklyn and struck a cyclist. A photograph (seen here) of the incident—showing the car skewed at an awkward angle in the bike lane—would be enough to trigger reasonable cause, even if an officer didn't witness it.

"Certainly credible testimony would also be sufficient. It doesn't have to be photographic evidence," Vaccaro says, adding, "Especially if driver's own testimony to the officer at the scene is an admission that, 'Yes, I broke the law.' There is nothing more reliable than an admission against your own interests."

Senator Daniel Squadron, the bill's co-sponsor, said in a release, "Law enforcement must have every tool at their disposal to protect pedestrians, cyclists, and drivers as we work toward the safer streets New Yorkers need." Senator Brian Kavanagh is the bill's other co-sponsor.

The bill would also allow judges to suspend or revoke a driver's license; a misdemeanor charge would also be levied after a second offense.

However, the law would only apply to those operating moving vehicles, not drivers who have parked their cars and carelessly open their doors. Last year 39-year-old cyclist Tskaka Cooke was killed after striking a car door that was suddenly opened in his path on a busy road in Queens.