“Oh my God, oh my God, this is crazy!” said Aklima Akter, bouncing up and down in her headscarf to chants of “We want Max!”

A North Shore resident of Staten Island who volunteered for Democrat Max Rose’s campaign, Akter was shocked but delighted as she watched the results roll in at Rose’s victory party on Tuesday night.

“I thought we would lose by a very small margin,” Akter said. “Oh my god, Max!”

“We were never in this to win an election, we were in this to change politics irrevocably,” Rose said to wild cheers. “The politicians who ignored us for so long, who said, ‘That seat’s not winnable. That’s cute what you’re doing knocking on doors,’ those folks they cannot ignore us anymore, because we are going to D.C. together.”

Rose ran as a reform-minded spitfire. He told corporate PACs to “keep your money” and said voters need to “get rid of all the leadership” in Washington D.C., “starting with you Dan Donovan.”

And yet, Rose also struck a conciliatory tone across the aisle, vowing to work with the president, eschewing the partisanship embraced by many progressive Democrats in recent months. Throughout the campaign, Rose ceaselessly touted his experience as a decorated Afghan war veteran, even chugging beers on the street. Meanwhile, this London School of Economics graduate told Gothamist he wished more people would ask him about the finer points of his multi-pronged policy to deal with the opioid crisis.

Rose had several key advantages late in the race. The Democratic campaign’s war chest dwarfed Donovan’s, and its canvassing efforts appeared far more effective going into the final stretch of the campaign. Three weeks before election day, Max Rose had $1.4 million to Donovan’s $280,000 cash on hand. At that point in the race, the Rose campaign says it had knocked more than twice as many doors, and placed twice as many lawn signs as Donovan’s team reported. On election night, Rose said his volunteers had knocked on a half million doors.

Given how consistently Staten Island voters elected Republicans to Congress in recent years, few pundits or prognosticators believed Rose could pull off a win. Even if he did, one expert said, it would take a massive “blue wave” capturing 50 to 60 seats to wash away Donovan’s incumbent advantage in a district that Trump easily won in 2016. But the results of the midterm election were more of an uneven tide than a wave, in part due to decades of gerrymandering. Democrats took 26 seats—and yet, Rose won. 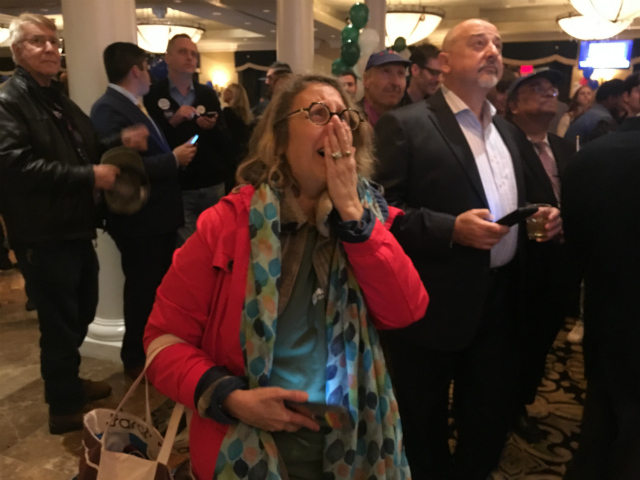 Last spring, conjecture surrounding the race for Staten Island’s congressional seat were whether a Trumpian politician, former Congressman Michael Grimm, could recapture his seat after serving a prison term for tax fraud. Donovan triumphed in the Republican primary with the help of President Trump’s endorsement and many assumed he was on an easy path to re-election. Rose’s upset victory dispenses with the common assumption that this district is too conservative for a Democrat to win, even as many other Democrats across the country failed.

Asked about their victory, Rose campaign volunteers were quick to point to a canvassing operation that began as early as last year to boost Democratic turnout. “I’ll tell you why we won. We were the field team that was knocking on doors all summer in the heat,” said Mara Bianco.

Earlier in the day, it looked like an autumn rainstorm might hold Rose back from a win, as bad weather tends to favor Republicans. But as wind and rain swept through the city, voters upended predictions that it would dampen turnout. Sopping voters braved widespread problems with malfunctioning scanners and some soggy ballots, waiting in long lines to vote.

At 5 p.m. on election night, Rose’s campaign manager Kevin Elkins noted there were “numerous poll sites with issues” in Brooklyn, including scanners that were down for hours, long lines, and poor management by poll workers. There were no similar problems in Staten Island, he said, and turnout was up all across the district. 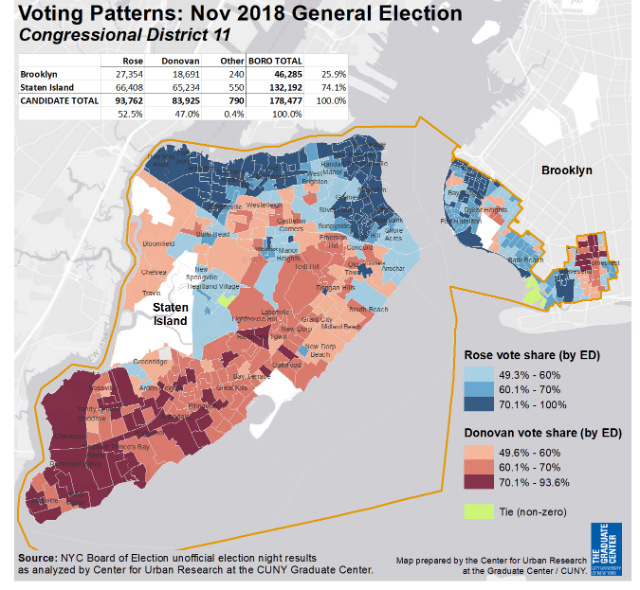 At five poll sites in northern Staten Island, where Democrats typically perform best, coordinators told the Gothamist that they were seeing many more voters than they typically do.

“It’s tremendous. I think it’s higher turnout than the presidential election” in 2016, said poll site coordinator Chris Lavelle, tallying 1,391 ballots just before 6 p.m. at I.S. 27, a few blocks from Rose’s campaign headquarters and hours before polls closed. Lavelle recalled a total of about 1,400 ballots were cast in 2016.

Tuesday’s results did mirror some past voting patterns, in particular, that Staten Island tends to fade from blue to red, north to south. That middle ground became the battleground. Voters in the 63rd Assembly District, located in Mid Island, were key. Rose picked up several precincts there and had very deep support on the North Shore.

As illustrated by Steven Romalewski, director of the CUNY Mapping Service for the Center for Urban Research at the CUNY Graduate Center, Rose eked out a win in Staten Island with just under 1,200 more votes and picked up 8,600 more votes than Donovan in Brooklyn.

Regardless of the math, Rose’s win is a remarkable upset.

“The story of this country has always been that no matter our differences, no matter the challenges in our way, we do what others said was impossible,” Rose said during his speech. “And they said this wasn’t possible!”

Thanking his campaign team, Rose quipped, “You figured out how to make a 5’6” kid whose balding from Brooklyn into something cool, man!"

#2018 election
#Congress
#dan donovan
#max rose
#midterms
#staten island
#original
Do you know the scoop? Comment below or Send us a Tip