In the freezing rain a few yards away from Bank of America's New York headquarters on 42nd Street, the man who made America see Goldman Sachs as a "vampire squid" was describing his research on a forthcoming article. "I called up my source and told him that I wanted to highlight all the really bad things Bank of America has done, and he said, 'What, do you have 1,000 pages?'" Matt Taibbi was speaking to a group of Occupy Wall Street protesters about BoA's central role causing the still-reverberating mortgage crisis, and explained the bank's crimes thusly: "Mortgage backed securities are like banks selling oregano as weed. And that's exactly what Bank of America was doing."

Bank of America received more than $45 billion dollars in taxpayer funds when the economy tanked in 2008, and though it has paid that amount back, the company continues to break the law, paying the SEC nominal fees as the cost of doing business while its employees have admitted to committing fraud in the form of robosigning and other activities that would spell doom for most businesses. "If this were any other kind of industry," Taibbi said, "these guys would be in jail."

Taibbi also explained how many of the savvier financial institutions, once they realized their CDOs (which Taibbi described as a "bag of mortgages") were "shit," made money by betting against their own products. "It's the exact same thing as buying a lot of cars with no brakes, then taking out life insurance policies on all the drivers."

When asked what he thought the public can do about it, Taibbi recommended taking your money out of BoA and putting it in a local bank or credit union, and to contact your elected officials. "Attorneys general are the most likely to apply pressure on banks."

Has Taibbi soured on Eric Schneiderman now that the president co-opted him for his mortgage crisis unit? "His impact remains to be seen. He still has an opportunity to prosecute banks that broke the law. But if nobody goes to jail, he's a failure and a fake."

After the talk, several hundred protesters remained in the miserable weather to shout outside Bank of America, as scores of NYPD officers blocked their access to the sidewalk adjacent to the imposing glass building. "[Kicking protesters out of Zuccotti Park] was such a terrible, stupid, tactical error," Taibbi said. 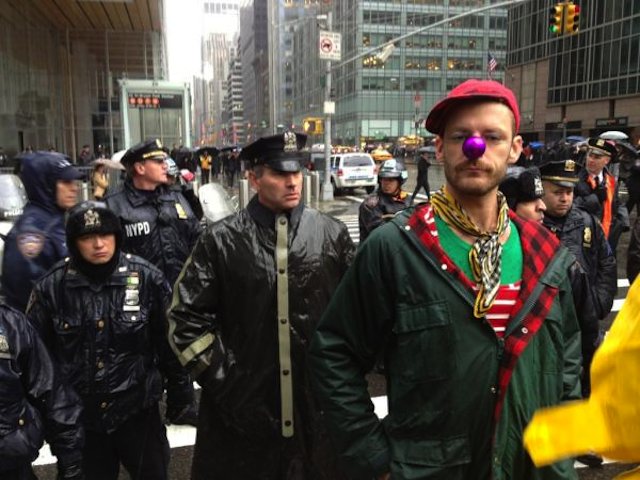 "They couldn't have done more to help Occupy Wall Street. They were smart in the beginning to let them stay in the park, but why not let the weather do the job? It makes no sense." He gestured at the police presence around the park. "And there are so many cops around here today—why?"

"I fully expect Occupy to crank up their presence in the spring, especially when the conventions meet. They have the potential to make a huge impact on the election." Would he show up to support OWS again? "Maybe." But presumably he's on a deadline: his Bank of America story is due in three weeks.