by Garth Johnston
Earlier this month we noticed some clever New York-specific ads for a condom company we'd never heard of called Sir Richard's. Curious, we looked up its website and found a company with real social conscience cred—for every condom it sells, Sir Richard's plans to give another condom away for free in a developing nation. Also, their condoms are vegan-friendly? Wanting to know how exactly a condom can be vegan-friendly, we called up the company's CEO Mathew Gerson to talk about everything from condom packaging to the HIV pandemic to the classic combination of food and sex.

So, Sir Richard's condom company. You started up this year, right? We've been in development since late last year, as far as getting the team together and raising the money, and then we spent a lot of time on the brand identity. As you can imagine, it was an involved process. We're trying to communicate something specific across so many demographics: to women, to the LGBT community, to socially aware college-age heterosexuals, so it really was quite an involved process. But we certainly learned a lot about this industry and what it's drastically lacking.

And what is it lacking? If you looked at condoms lately, they are pretty sterile, pretty creepy. The branding tends to not be very uplifting and the humor is pretty sophomoric. There's the general sense of "hold your nose, grab a box and leave the store," just because that's the only option available. And I think that's indicative of an overall lack of transparency and lack openness around human sexuality that's pervasive in this culture, and it's extended into brand space.

Also the brands really haven't risen to the challenge to uplift the category of contraceptives and, more specifically, what they represent, human sexuality and having respect for your own body and the body of your lover. We're looking to hopefully try to inspire some broader conversations that's pretty drastically lacking in this culture.

Where did Sir Richard's come from? What we recognized is that trust is a huge issue in this space, because beyond these products having a certain utility, they have a certain function they have to perform. We wanted the brand to connotate some degree of trust and strength, and the nobleness and the integrity that's associated with the knighthood and being knighted. There are obviously a few puns, too. My brother pointed out "the Knight Hood." And a lot of 20-year-old guys see Richard... the short-term of Richard being Dick seems to get a chuckle out of certain demographics.
When we matched that up with the plaid it sort of grounded out the hyper-masculine aspect of the knighthood with the beauty of the plaid boxes.

OK, so we have to ask. What makes a condom vegan-friendly? Well, first, we didn't set out to start a vegan-condom company. But to answer your question, there is a dairy by-product called casein in almost every condom in the US. There are three other vegan-friendly brands, only one of which is available in the US I think. All very not well known, but they all don't use casein, which gives them a vegan friendly status. My uncouth joke is that since we don't have dairy in our condoms that sort of by default makes our condoms kosher as well.

If you didn't set out to make vegan-friendly condoms, what did you set out to do? I had found out through some side-interest in the HIV pandemic, looking at certain social issues that were preventable—especially HIV since it's a preventable disease—there is this massive need-gap for free condoms globally. So specifically that was the social aspect of this venture, where we wanted to address this need gap with a one-for-one model where we will make one condom available for free for people who cannot afford them. The idea being that safe sex should be a human right and if people want to have safe sex they should have the opportunity to practice it regardless of the economic condition. Working with Partners in Health in Haiti, what we'll be doing is branding a Haitian condom and making it available for free.

We're going to provide them twice a year with the condoms, and then they'll be distributing them through their clinics, through their outreach, through their sexual health programs around Haiti. The idea in the longview is, right now its triage—there are critical issus that need to be addressed for people's survival and safety (physical safety, mental safety). Condoms are not usually thought of in terms of when you have a crisis like this—it's food, shelter, medical supplies. But HIV is a significant issue in a place like Haiti, especially when you have individuals living in close proximity, which is the case right now with so many people who haven't been able to move out of the camps yet. But I think that would go for all of us: if you don't have a lot of opportunities for recreation and you find yourself in a tent a lot of the time, you are going to make love because its a way to transcend the unfortunate conditions that you find yourself in.

So we want to try our best to get condoms there, hopefully by spring or summer of next year we'll have their condoms ready and available.

(via Snarly's flickr stream).
We enjoyed your ad campaign with school tuitions. Any otherfun campaigns coming?

Oh yeah, we're going to roll them out selectively. We're trying to have this open conversation with a couple specific demographics that have been left out of the condom conversation. You know, women purchase around 32% of condoms in the US. If you look at branding out there, other than from some color schemes, it seems like they aren't being heard in this dialogue. They're not being empowered to go out and find a condom that speaks to them. The same thing goes for the gay community, and the other 30% of condom purchases are coming from college age students. So we have a real fun opportunity to do targeted select campaigns, whether it's campus-based or city-based. Look for something else to be coming out around Valentines Day.

Now in terms of finding these demographics, we noticed that Sir Richard's are available in some clothing stores, which is interesting. Paul Smith picked them up for a couple of their stores in the city, as well as their big store out in Los Angeles. Fred Segal, which has a big following out in LA, has picked them up. We want to see condoms more and more in alternative sales channels. Whether or not people are going to those stores to buy condoms, it validates them in the sense it removes the social stigma that's perpetuated in and around condoms because of the way we merchandize them and we sell them like they are sterile medical devices... It's really unique. I don't think stores like Paul Smith or Fred Segal have ever carried a condom before, so that does bring some attention to us.

And is there anywhere else where our readers can find your condoms in New York? Starting in January, we'll be in all the Whole Foods' around the city, which is great. It sounds like Whole Foods has finally going to give condoms their due. Right now you can find a pack of Kimonos under the bubble bath in the beauty care aisle on the lowest shelf. Most people don't even realize Whole Foods has condoms, but they brought on all six of our styles, so hopefully they've give them some good representation and people will integrate condom buying with their Whole Foods outings. 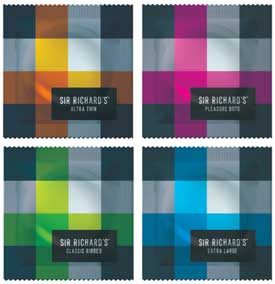 Food and sex—classic pair. Yeah why not? I think by the end of next year you'll see the brand in some larger conventional pharmacy chains, but it's hard to get in those places. We're in dialogue with them now, but we've been really pleased we've gotten into some of the alternative channels, especially Whole Foods, which was a big one for us as new brand.

Finally, do you have any thoughts as to where condoms will be going in terms of technology and style in the future? Well I'm hoping they'll design one you can just wear all the time.

That could get messy. I'm just kidding. You know it's such a hyper-regulated industry because its something you put inside the body. So the FDA is really tight on every aspect of RD—what you can and cannot do in the creation of a condom, how you package it—it's got to be packaged in a certain type of foil. You can't have it in a matte box, it's got to be a glassy box because of the way UV lights reflect? Refract? Reflected? Refracted? I don't know even know what the hell it is. I can't imagine there being a lot of change on the condom side, just because its such a regulated industry.

Where I see the opportunities is on the brand side, on the communication. It's a product that means so many things to so many people, so it's an opportunity to have a lot of different conversations and that's where I think our brand is going. We're trying to pull people out in the sense, "hey, you're a sexual being, you're practicing safe sex, you should feel good about yourself. You're being responsible, you're taking care of yourself, you're taking care of your lover. Hopefully you're being tested, hopefully you know your status with each new partner." That's something people should feel good about, instead of judged and having to go through that who social stigma about being embarrassed about buying a box of condoms.

#condoms
#hiv
#Mathew Gerson
#Partners in Heath
#Sir Richard's Condom Company
Do you know the scoop? Send us a Tip