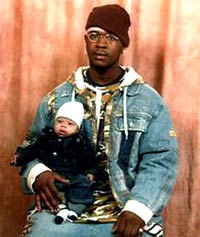 Yesterday, the police arrested Rodlyn Petitbois (pictured), who they believe killed a Massachusetts woman who sheltered Petitbois's girlfriend and their four children. Petitbois was found walking down a street while the children and mother were found in Prospect Park.

Petitbois allegedly stabbed Greenland Etienne, who had been trying to stop him from attacking girlfriend Louna Eveillard, early Wednesday in Lynn, MA. Petitbois had stabbed his girlfriend in the hand, and when Etienne tried to call 911, he allegedly attacked her. Police say he then fled with Eveillard and the kids, taking a bus from Boston to NYC.

An Amber Alert had been issued, but it's unclear whether Eveillard traveled with Petitbois willingly. The authorities were able to zero in on their location when Eveillard used her welfare card to buy groceries. Petitbois, who faces first-degree murder charges in Lynn, MA, will face a judge in Brooklyn today.

#brooklyn
#Lynn
#Massachusetts
#murder
#Rodlyn Petitbois
Do you know the scoop? Comment below or Send us a Tip