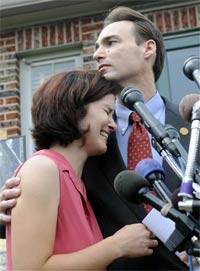 Cheye Calvo, mayor of Berwyn Heights, Maryland, has asked the Department of Justice to investigate the Prince George's County police after they raided his house and killed his two Labrador retrievers.

The police were tracking 417 pounds of marijuana--32 pounds had been addressed to Calvo's wife Trinity Tomsic. Calvo's mother-in-law asked the deliveryman (really an undercover cop) to leave the package on the porch. When Calvo returned home, he took the package in;per the Baltimore Sun, "He changed clothes and walked the dogs, waving to the men and women sitting in cars near his home. He did not know they were police." When he got back home, a SWAT team stormed his house.

They shot 7-year-old dog Payton, handcuffed his mother-in-law (making her lie next to the dead dog), shot 4-year-old dog Chase in the back and then handcuffed Calvo. Tomsic, who wasn't present, said, "They were my kids. All I could see was the blood and the tissue of the dogs"--the police apparently tracked the dogs' blood through the house. The police also claim they had a no-knock warrant, but Calvo and his lawyer dispute that. The police did arrest two men involved with the drug ring, who would take the packages from porches.

In NYC, residents have had to deal with no-knock raids stemming from bad information. Back in 2003, a 57-year-old Harlem grandmother died when the police mistakenly stormed her home in a no-knock raid.

#Cheye Calvo
#maryland
#no knock raid
#no knock warrant
#police
Do you know the scoop? Comment below or Send us a Tip