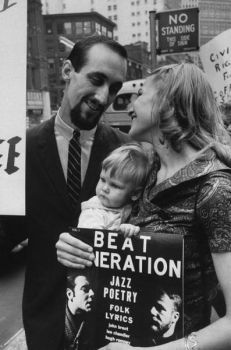 Will 2009 not end until it's taken all of our most beloved souls? Mary Travers, of folk group Peter, Paul & Mary, died at the age of 72 this past Wednesday. Travers was at Danbury Hospital in Connecticut when she succumbed to "side effects of treatment from a bone-marrow transplant after battling leukemia," according to her publicist. While she started out life in Louisville, Kentucky, she moved to Greenwich Village at the age of two (and later in life she moved to Redding, Connecticut).

Travers attended the Little Red School House in New York, until expelled in 11th grade; she sang back up for Pete Seeger; she performed with the band that made her most famous at the Washington march that Dr. Martin Luther King Jr. delivered his famous "I Have a Dream" speech. A life well lived, indeed. She once said, "We've learned that it will take more than one generation to bring about change. Those of us who live in a democracy have a responsibility to be the voice for those whose voices are stilled." One fellow musician noted that “She was obviously the sex appeal of that group, and that group was the sex appeal of the movement."

Peter, Paul and Mary formed after singing "Mary Had a Little Lamb" in Noel Paul's New York City apartment, and began performing in 1961 at Folk City and the Bitter End; their last performance was in New Jersey on May 20th. After the jump, watch them perform some of their better known songs, back in the glory days.

There is a statement from Peter Yarrow on the band's website, saying, in part, "I have no idea what it will be like to have no Mary in my world, in my life, or on stage to sing with. However painful her passing is, I am forever grateful for Mary and her place in my life.” Travers is survived by the many who loved her, including her husband, Ethan Robbins and daughters, Alicia and Erika.