Martin Shkreli: My Arrest "Seems Like A Real Injustice"

Martin Shkreli, the reviled douchebag pharmaceutical bro and rap connoisseur who was arrested last week for securities fraud, has given his first interview. Speaking with the Wall Street Journal, the 32-year-old insisted the government targeted him because he's just a horrible human being, not because he actually did anything criminal, "Beating the person up and then trying to find the merits to make up for it—I would have hoped the government wouldn’t take that kind of approach."

Shkreli's flamboyant trolling—livestreaming his activities, fighting on Twitter—made him globally infamous when, as CEO and founder of Turning Pharmaceuticals, he raised the price of a drug used to treat toxoplasmosis in AIDS and cancer patients from $13.50 per tablet to $750 per tablet.

However, the federal authorities say that his previous companies were actually part of a Ponzi scheme to pay off lost millions to investors of his failed hedge fund, using stock from a different pharmaceutical company, Retrophin. After ousting Shkreli, Retrophin then sued him for $65 million.

Discussing his public persona—like offering to play the $2 million Wu-Tang Clan album for Taylor Swift if "she wants to come over and suck my dick"—Shkreli claims he was just playing:

“What do you do when you have the attention of millions of people? It seemed to me like it would be fun to experiment with,” Mr. Shkreli said in the interview. He said he was arrested “because of a social experiment and teasing people over the Internet,” adding, “that seems like a real injustice.”

He also scoffed at U.S. Attorney Robert Capers and the feds, ""You know, the press conference they put on was unacceptable. They used the term ‘Ponzi,’ or ‘Ponzi-like,’ which is nowhere near reality. The indictment doesn’t use that word."

Well, the U.S. Attorney's press release does use the term Ponzi—and if you read the indictment, it definitely describes a Ponzi scheme:

The hoverboard enthusiast has been cooped up in his Murray Hill apartment since making bail because photographers are waiting for him to emerge. Over the weekend, Shkreli's social media was apparently hacked; Shkreli dismissed the perpetrator a "10-year-old." A 10-year-old with a solid sense of parody! 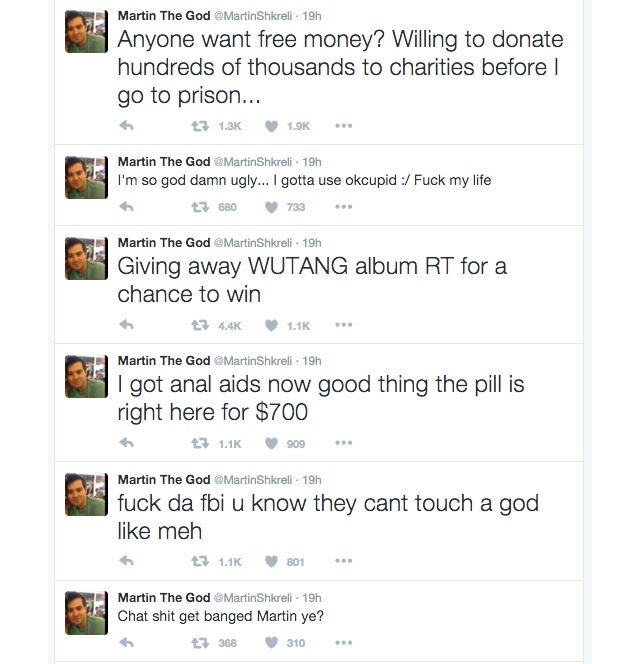 "The indictment itself is lacking rigor. I think it doesn’t tell my side of the story at all," Shkreli told the Wall Street Journal, wearing "the same gray, hooded sweatshirt that he had on when he was photographed after the arrest Thursday." WSJ adds, "Mr. Shkreli declined to answer specific questions about the allegations, or about his defense. He faces up to 20 years in prison if convicted. Evan L. Greebel, a lawyer who worked with Mr. Shkreli, was also arrested for his role in the alleged scheme. Mr. Greebel has pleaded not guilty."

He now says he should have been less controversial and attention-whoring in his ways, because now there are regrets: "Most people don’t know the real Martin Shkreli. I think it would make sense to show them."