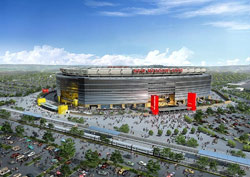 Put any thoughts of the new Giants-Jets Stadium being named Mara Field (after the recently deceased and beloved Giants owner Wellington Mara) far from your heads. Sports marketing experts believe that the value of slapping a corporation's name on the arena, which is expected to be completed in 2010 and cost $1.3 billion, could generate revenues of $25 million to $30 million annually for the two teams. In comparison, the Mets are charging Citigroup $20 million annually for 20 years to name the team's new stadium in Queens Citi Field.

The high price tag the new East Rutherford stadium is expected to have attached to it is because the tri-state area is already the most expensive media market in the nation. In addition, the stadium will be home to two NFL teams - tada, no dark weekends at the stadium! Which means the corporation with its name on the structure will be mentioned hundreds of times every single week of the season.

In addition to naming the overall stadium, the owners are planning on divvying up its interior into four exclusive advertising quarters, which will be available to other corporations. Replacing the clutter of multiple billboards, these sponsors will be able to place their name and their's only over 1/4 of the interior, to maximize on-camera exposure.