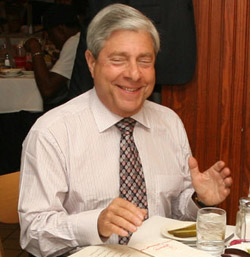 After the Daily News raised questions about $680,496 in no-bid contracts that Brooklyn Borough President Marty Markowitz awarded to the nonprofit he runs out of his office, a spokesperson for city comptroller Bill Thompson tells the Brooklyn Paper that he's "very concerned about the contracts, which were clearly meant to circumvent the transparency [of] the contract registration process.” Thompson and Markowitz are both possible mayoral contenders.

The contracts have raised eyebrows in part because four of them were issued on the same day and each one was for $24,999, which happens to be one dollar below the threshold that would have triggered a review in 2005. (That threshold was lowered to $5,000 this year after the City Council budget scandal.)

On Tuesday Markowitz defended the contracts, explaining in a statement that "Borough presidents have the absolute right to contract funds...and these contracts, as per the [city’s] rules, are not required to be bid out." The contracts were awarded to Best of Brooklyn Inc., Markowitz's nonprofit that sends disadvantaged children to camp and sponsors cultural events like last weekend's Brooklyn Book Festival. Half of the $1 million budget comes from city and state funds and the rest from private donors. Markowitz argues that the non-profit structure enables him to raise money for more projects because it appeals to companies who want to write off their donations.

But as the Brooklyn Paper points out, this blurred line between Markowitz's charity work and his official duties has made some watchdogs suspicious. For instance, Markowitz has been a longtime supporter of Bruce Ratner’s controversial Atlantic Yards project. And Ratner's company gave over $200,000 last year to fund a Brooklyn concert series, in addition to a donation to Best of Brooklyn that the paper estimates at $15,000–$60,000. “If it’s not illegal, it certainly raises some very serious ethical questions," Dick Dadey of the reformist Citizens Union tells The Daily News.

#best of brooklyn
#borough president
#charity
#marty markowitz
#new york city
#nyc
#scandal
Do you know the scoop? Comment below or Send us a Tip