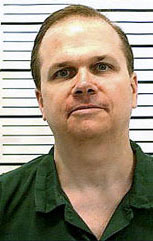 During his parole hearing, in which he was denied parole for the sixth time, Mark David Chapman discussed his other possible targets with the board—but over the years he's forgotten many of them! In a 1987 interview with People magazine, Chapman says aside from John Lennon, he also considered killing Paul McCartney, George C. Scott, Elizabeth Taylor, Johnny Carson, Jaqueline Kennedy Onassis, (now former) Hawaii Governor George Ariyoshi, and Ronald Reagan (who was President at the time). The NY Post reports that at his recent parole board hearing, however, he could only remember Carson and Taylor.

The 55-year-old told the board, "I was going through that in my mind the other day; I knew you would probably ask that... I lose memory of perhaps the other two." In the end, he says Lennon was just easier to get to; "I had a list of people and he was at the top of the list, and he seemed more accessible to me. If it wasn't Lennon, it could have been someone else." As the NY Times points out, he also forgets the name of the movie he's mentioned in the past that gave him second thoughts about killing Lennon. That movie was Ordinary People, but at the most recent hearing he told the board, "I saw a movie. I can’t remember the title of it, it was an important movie... and I came out of the movie theater and called my wife and told her... I’m coming home."

The full transcript from his recent hearing can be read here.