Marc Jacobs May Be Charged in Armory Bribery Case 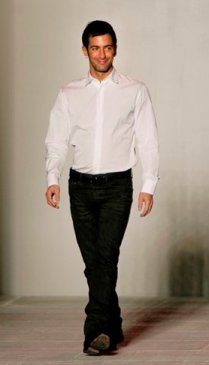 On Wednesday, State Attorney General Andrew Cuomo crashed Fashion Week when he announced an indictment against the former superintendent of the 26th Street Armory. James Jackson had solicited bribes from fashion darling Marc Jacobs (pictured), who allegedly complied in order to secure the coveted armory space for his fashion shows. The Armory is considered a "community asset" whose space is to be used by the military and public.

As of Wednesday, the designer was in the clear, but his luck may change very soon. The Post reports the designer has refused to fully cooperate with investigators:

"Jacobs dragged its feet on this investigation, and that caused a long delay in handling the case," the clearly miffed law-enforcement official said.

"They were slow in coming forward to fully explain what had occurred, and one senior company employee in particular was not made available to speak with investigators for several months, and that didn't help."

Rebellion is the new black. And this sounds sort of like Troopergate when Governor Spitzer wasn't so keen on cooperating with Cuomo!

Cuomo's spokesman said that Jacobs and his company, Marc Jacobs International, are subject of an ongoing criminal investigation. At any rate, the Post add that charges against the designer could depend on whether he is found to be a victim of extortion (as opposed to willingly offering the bribe).