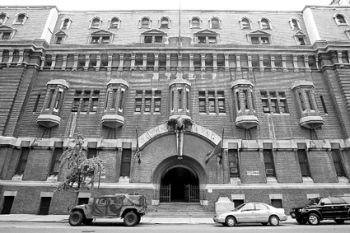 It wouldn't be Fashion Week without a little bit of scandal, and this week a state government employee nearly made runway roadkill out of designer Marc Jacobs.

Jacobs, apparently so over the tents, has staged his shows at the 26th Street Armory (also known as The 69th Regiment Armory) from February 2000 to...this week. In order to get exclusive access to the building during Fashion Week, he's had to pay the piper. Charges were filed yesterday by the New York attorney general, Andrew M. Cuomo, stating that Jacobs had to bribe a state government bureaucrat, James Jackson, who controlled access to the building (24 of the 31 counts being brought against him are related to Jacobs).

The designer didn't offer to pay up, but he did comply when he was solicited by Jackson, superintendent of the armory since 2000. In total Jackson has received over $40K in bribes and has displayed a "pattern of payoffs" in his time working there. And he didn't just want cold hard cash or front-row gift bags, he's asked for a computer and a Bowflex exercise machine. Who wouldn't hand over a Bowflex for such a coveted venue?

In return the designer got holds on dates, less paperwork and early access to the building (something that would have cost him more money in the long run). More importantly, he got exclusive access during Fashion Week. In the past Jacobs has been "criticized by other designers because he has an exclusive deal with the armory that keeps them from showing there during Fashion Week."

Jackson resigned late last year after being busted, and pleaded not guilty at his arraignment yesterday. If convicted he'll be facing up to 20 years in prison, where his bribing skills will probably come in handy. As for Jacobs, he won't be donning stripes anytime soon, and he has full consent from the attorney general's office to have his show at the armory this week. Legally gaining access to historical spaces in which to hold your runway shows is so in this season.

Photo via The Villager.

#29th Street Armory
#69th Regiment Armory
#As
#attorney general
#bribe
#crime
#fashion
#fashion week
#marc jacobs
#new york
#The Villager
#this week
Do you know the scoop? Comment below or Send us a Tip
A new Gothamist is coming! We’ve moved comments over to our beta site. Click here to join the conversation and get a preview of our new website.