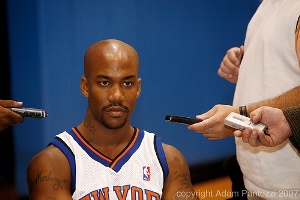 More trouble for the Knicks: Captain Stephon Marbury was missing from the morning shootaround in Phoenix, where the Knicks are set to play the Suns tonight. Marbury's apparent absence comes after coach Isiah Thomas may have told him he wouldn't be starting tonight and a Daily News article suggesting that the Knicks were thinking about a Starbury-less team in the future.

Coming off a bad loss in Miami where Marbury threw the ball away in the closing minutes, Thomas told the entire squad that it was on notice. And Marbury was either going to be benched for the start or would have his minutes reduced. Was he channeling Garry Templeton, who once said, "If I ain't startin', I ain't departin'!"? The Post reports that Marbury that he "feels he's best playing 40 minutes a night and would struggle in a non-starting role."

It's unclear where the Brooklyn native, currently in his fourth year with the Knicks, is. Newsday simply calls him AWOL, but he could have flown home to New York. Thomas told reporters, "We hope he's at the game. If not, make no mistake about it, we do want him as a member of this basketball team."

The Daily News' Frank Isola suggests Marbury could be the "fall guy" for the Anucha Browne Sanders incident, given that Marbury allegedly called her a bitch and admitted to luring an intern into a truck for sex. Marbury has also had some odd public moments, from trying to defend Michael Vick's dogfighting charges to a bizarre interview with Bruce Beck.

Photograph of Stephon Marbury after a team practice by Adam Pantozzi/tozzer.net