Marbury Must Stay Away from the Knicks 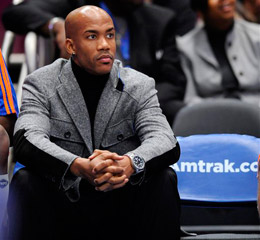 Stephon Marbury is officially a persona non grata to the Knicks: A meeting to discuss his future with the team ended with, the Daily News reports, "storming out" and the Knicks asking the point guard to stay away!

Knicks president Donnie Walsh said, "After meeting with Stephon and his representative this afternoon, we have directed Stephon not to participate in practice or attend games until further notice. " What?!? No more sulking Stephon on the bench? Walsh's statement went on, "We want to continue to meet with him to discuss a long-term resolution.” Still, the NY Times called the meeting "the figurative end to his turbulent five-year tenure with his hometown team," and says the "most likely resolution remains a buyout agreement, which could take some time."

The sticking point: The Knicks want Marbury to take a $3 million pay cut (from his $21 million salary), while Marbury apparently is only willing to take $1 million less. The News suggests the soonest the Knicks will cut Marbury would be January 1, 2009, so Cablevision can report the loss next year.

In the meantime, the players' union is investigating whether Marbury can actually be banned; a source tell the Post, "Anytime an employer imposes discipline, they have to demonstrate just cause. Why did they discipline him? And the contractual argument is he's allowed to continue to market himself as a professional basketball player and keep in good physical condition."

#basketball
#cablevision
#Donnie Walsh
#drama
#knicks
#stephon marbury
Do you know the scoop? Comment below or Send us a Tip