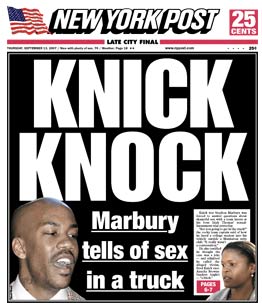 Stephon Marbury turned in a typical performance during and after his testimony at the sexual harassment trial that pits former Knicks marketing executive Anucha Browne Sanders against Knicks president and coach Isiah Thomas. And by typical, we mean that he testified that when he first found out about the lawsuit, he "laughed" - "I meant it was more of a joke than anything" - and treated reporters to some singing when they questioned him.

Marbury also admitted to "luring one of Browne Sanders' interns" into his truck, though he didn't admit to having sex with her, saying, "We got together right across the street." Browne Sanders had testified earlier about the intern, who told her that she had sex with Marbury. She said the intern told her, "Anucha, if it was anyone else I would have walked away. I felt like I had to." The Daily News noted that Browne Sanders "added, 'She basically did whatever he asked her to do. She considered it to be consensual because she agreed to get in the car.'" Browne Sanders reported the incident to management, but they never questioned Marbury.

Marbury initially said that he didn't hate Browne Sanders, but then later admitted that he had been angry at her for not giving him more seasons passes as well as an incident involving his cousin, who had worked under Browne Sanders and later fired for forging time sheets: "I said a lot of different things... I said she doesn't run s--- -.... I may have said f--- her. I didn't call her a black bitch" (one of her claims). He also defended Thomas, saying that it was unlike the coach to swear, "That's not his style."

After his half-hour of testimony, Marbury told reporters, "Man, money makes you do crazy things...I'm talking about that man who tried to jump off the thing for the cash." And outside the courthouse, it became the media attention caused Marbury to show his colorful personality. From Newsday columnist Shaun Powell:

Surrounded by cameras, Marbury left the courthouse and strutted down Reade Street, not saying much at first. Then he broke into a Chris Brown song. Then he poked fun at a reporter's shoes, giggling and teasing and pointing. Then he resumed singing, only louder. A passer-by asked: "Hey Steph, who has the better jump shot, Anucha or Isiah?"

"Uhhh, let me think about that one," said Marbury, with a grin. "Hmmmm."

Then he started singing again.

After four blocks, he finally reached his car, a purple Rolls Royce, which slowly pulled out of the parking lot with Marbury in the backseat. Then it stopped. Marbury stepped out and demanded to have his picture taken with another reporter. More laughter from Steph. Then he stepped back into the Rolls, rolled down the window and revealed how "grrrreat" he felt.

In her testimony, Browne Sanders also said that when she complained to Madison Square Garden president Steve Mills about Marbury calling her a "black bitch," Mills apparently said, ""Isiah Thomas is going to start a rumor about you having an affair with... another employee in the office." When Browne Sanders asked if that was a threat and if she needed to hire a lawyer.

Thomas as well as Madison Square Garden, who was also sued, are trying to argue that Browne Sanders was not sexually harassed and that she was fired because of poor job performance. However, she was given bonuses and raises.