Maps Show Where Sewers Overflow Most In NYC

Earlier this week, a new UN report on climate change painted a dire picture of what lies ahead for the planet earth. New York City, of course, is all too familiar with the effects of climate change, having dealt with freak weather that left neighborhoods underwater and the shores vulnerable to further encroachment by the sea. In the aftermath of Hurricane Sandy, fortifying and modernizing our drainage systems has become an increasingly urgent priority for the city. But where to start?

Ben Wellington of I Quant NY has posted a breakdown of newly released information from the Comptroller's office that lists claims against the city for property damage done by overflowing sewers. Sewer Overflow Claims (SOC's!) give an idea of exactly where the city's drainage system is most vulnerable (or at least the residents are most vocal about it). Brooklyn and Staten Island lead the pack of flooded neighborhoods, which makes geographic sense given their proximity to the ocean, and their relatively low altitude.

The Brooklyn neighborhood of Canarsie is by far the leader in flooding, followed by surrounding neighborhoods, as you can see in the table below. Staten Island neighborhoods also take on a fair share of water, especially marshy areas like New Springville.

This other graphic Wellington put together below is also really interesting, as it shows the difference between overflow complaints from the three most recent major storms and normal rainfall. Not every storm produces flooding in the same places, nor does each storm guarantee that a neighborhood which is prone to sewage overflow will flood. 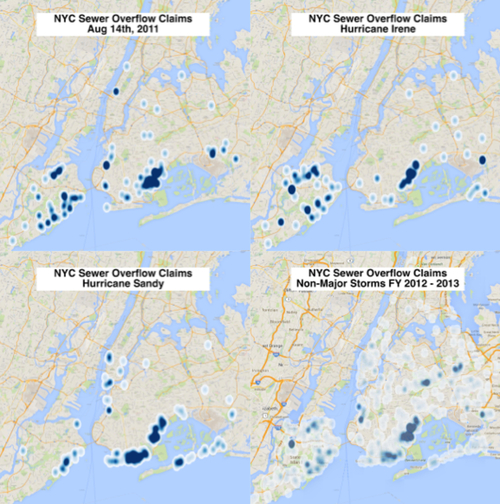 But as Wellington points out, there's a definite conclusion to be made: Something needs to be done about those sewers in Canarsie.

#Claims
#flooding
#maps
#Overflow
#sewage
Do you know the scoop? Comment below or Send us a Tip