Using census data, a Chicago grad student and blogger has created an interesting series of maps to examine the racial breakdown of New York City. Intrigued by a University of Michigan study suggesting that New York is the second-most-segregated metropolitan area in the U.S. (exceeded only by Milwaukee), Daniel Hertz drew up a map revealing large swaths of NYC where less than ten percent of residents are white. He then combined that with a map showing which areas are less than ten percent black. 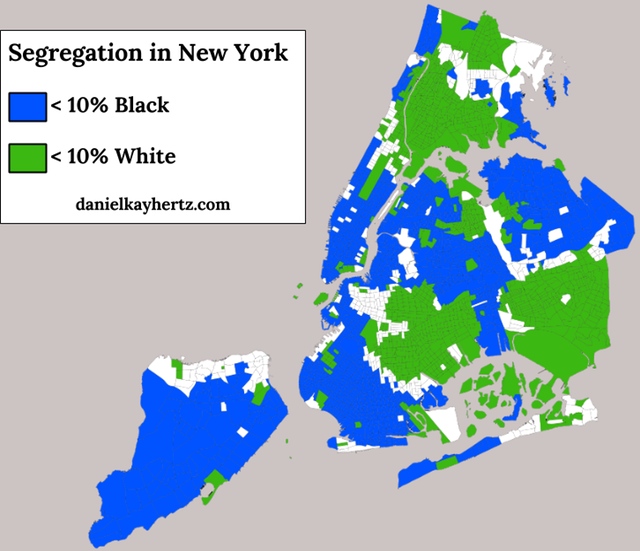 Hertz then repeated the process showing which areas are less than five percent "white" and "black." 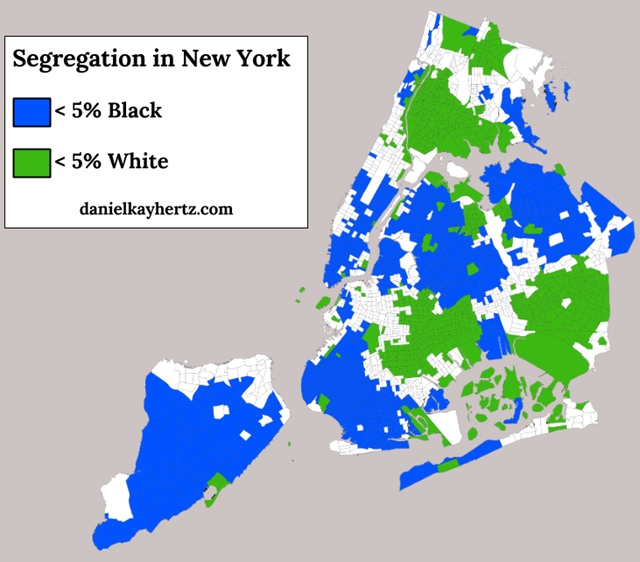 "What does all this tell us?" Hertz wonders. "For one, it confirms graphically what the Census numbers suggested, which is that the median black New Yorker lives in a neighborhood with very few white people, and vice versa. But it also suggests a racial landscape that looks different from that of Chicago, and lots of other American cities, in important ways. In particular, where Chicago has a relatively simple racial geography—white neighborhoods at various levels of integration with Hispanics and Asians to the north and northwest, black and Hispanic neighborhoods to the south and west, with only a few small islands like Hyde Park and Bridgeport that break the pattern—New York’s segregated neighborhoods form a more complex patchwork across the city."

Short version: We're still not as bad as Chicago.

On the other hand, a report published last month by the Civil Rights Project determined that NYC has the most racially segregated public school system in America. In more than half of NYC's 32 community school districts, white children comprise less than 10% of the student body. Charter schools—which the report dubs "apartheid” institutions—are worse; 73% have less than 1% white enrollment.

The report's author, Gary Orfield, writes in the introduction, "For years, when I’ve been invited to speak on the issue in New York, I point out that they live in the epicenter of educational segregation for the nation. It is incredible to me that the city, in the last generation, has created new sets of schools that produce even more isolation than the very segregated public school system."

When the 2010 Census data revealed the breadth of NYC segregation, Craig Gurian, executive director of the Anti-Discrimination Center, pointed out the problem's political dimension: "There has been, in my opinion, an unholy alliance in this city, where patterns of segregation are accepted by a variety of political leaders. You have to have a belief in civil rights enforcement like every other kind of law enforcement. You have to make it more than a once-in-a-while kind of thing."

Check out City Notes for more of Hertz's analysis and maps.

#maps
#segregation
#tale of two cities
Do you know the scoop? Comment below or Send us a Tip
A new Gothamist is coming! We’ve moved comments over to our beta site. Click here to join the conversation and get a preview of our new website.