Map: Where 9/11 Victims' Remains Were Found

The Post published this map showing where human remains of victims from the September 11, 2001 attacks were found by firefighters. The paper says, "Here's the chilling proof that Ground Zero stretches well beyond the boundaries of the World Trade Center site, and reaches close to the proposed mosque and community center." Yes, the Park 51 community center and mosque, two blocks away from the WTC site, is in the zone. 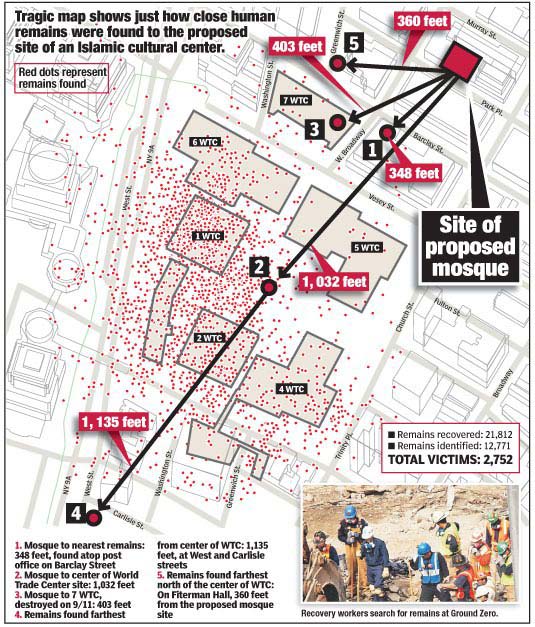 The Post explains, "The map was obtained by The Post from sources after the Fire Department did not respond to requests to review it. It shows that remains were found just 348 feet to the south of the mosque site at 45 Park Place, on top of the massive post-office building that stretches along Barclay Street, from Church Street to West Broadway.... Remains also were found atop CUNY's Fiterman Hall, bounded by Park Place and Barclay Street on the eastern side of West Broadway, just 360 feet away from the mosque site." (Fiterman Hall was razed last year.) You know what else is near the WTC? Stuff like this.

Park 51's developers claim that if they move the mosque, it means the radicals have won.

#9/11
#fdny
#firefighters
#map
#mosque
#September 11 attacks
#world trade center
#wtc
Do you know the scoop? Comment below or Send us a Tip