One of the primary deterrents against driving in the city is the lack of easily accessible parking, especially if, like me, you promptly forgot how to parallel park after taking your road test. But if you can park wherever the hell you want and shove your parking tickets in the glove compartment for decades to come, that's quite another story, and one that led diplomats in New York City to accumulate more than $16 million in unpaid ticket debt over the years, thanks to that much-hyped diplomatic immunity. Statistician and New Yorker Ben Wellington took a look at the numbers available through the city's open data portal, and mapped the globe's worst offenders:

Since 1997, the worst offenders have been Egypt, Nigeria, and Indonesia, with diplomats from Egypt racking up nearly $2 million in debt on 17,600 outstanding tickets. And this seems to be at the hands of just a few wayward drivers: Wellington found that four drivers with Egyptian diplomatic plates owed over $724,000 on 6,456 tickets. 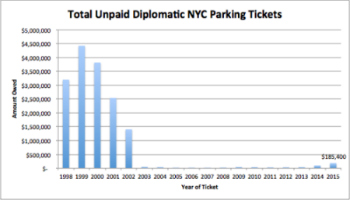 "I was surprised just how many times the worst violators broke the law," Wellington told us. "Parking illegally almost 2,000 times is no easy feat, but one Egyptian diplomatic plate led the way."

But if you look at this over time, Wellington notes, it's quite another story. In 2002, the number of unpaid tickets dropped significantly; just $50,888 was owed for tickets issued in 2003, compared to the $1,402,642 owed for tickets issued in 2002. Why the drop? 2002 was also the year that then-Mayor Bloomberg joined forces with the State Department to crack down on delinquent diplomats, asking the state to confiscate the plates of anyone who failed to pay tickets within 100 days. It worked: the numbers continued to drop to an all-time low in 2007, but have been on the up in recent years. Since 2011, the number of unpaid tickets has climbed from 281 to 1,538, and the open source data currently shows that $185,400 is currently owed for 2015's tickets. (According to the city's Department of Finance, the updated debt is actually a bit lower—$176,632.)

A spokesperson for the Department of Finance said that while the department can't account for the recent rise, as it's solely responsible for adjudicating and collecting tickets, "it is something that we're looking to resolve, and we're in the process of examining the entire issue and seeing what we can do."

Since Bloomberg's parking program went into effect, the top offenders have changed, presumably because the previous culprits' plates were confiscated and they were forced to meter park like the rest of us plebes. Between 2003 and 2015, the worst offenders were Indonesia, Italy, and Senegal, and in 2015 alone, Senegal, Qatar, and Nigeria topped the list.

At our request, Wellington also ran a correlation between the amount owed and countries' corruption scores, as quantified by Transparency International, the global coalition against corruption. Though the correlation was low, it showed that countries ranked high for corruption tend to accumulate more debt on their parking tickets, particularly once the corruption score falls below approximately 45 (with 0 being highly corrupt and 100 being very clean). 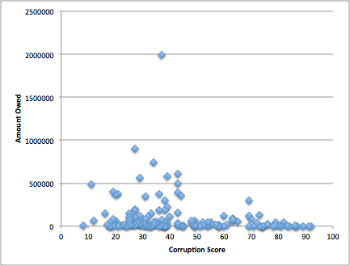 A spokesperson for the Mayor's Office for International Affairs couldn't provide any insight into the recent uptick in unpaid tickets, but said that "most diplomats work to ensure their compliance with the Program, paying tickets as they accrue and appealing to the Department of Finance according to established protocol when they wish to contest tickets—just like any New Yorker."

Looking at the dates, one might guess that with Bloomberg out of office, his policy has fallen by the wayside. Wellington guessed that the greater numbers in recent years may be due to the time it takes to pay a ticket, but noted that this would not explain the 2014 uptick (where the debt jumped from $39,562 to $99,440 after years in the thirty thousands) unless paying these tickets takes several years.

"The release of this data is a great step forward for transparency and the Open Data movement more broadly, so kudos to the Department of Finance for getting it out," Wellington said, adding, "Though the new rules seemed to have reduced illegal parking by diplomats substantially, countries like Senegal, Nigeria and Qatar continue, in 2015, to rack up large amounts of unpaid parking fines."

#bloomberg
#department of finance
#diplomats
#parking tickets
Do you know the scoop? Comment below or Send us a Tip
A new Gothamist is coming! We’ve moved comments over to our beta site. Click here to join the conversation and get a preview of our new website.