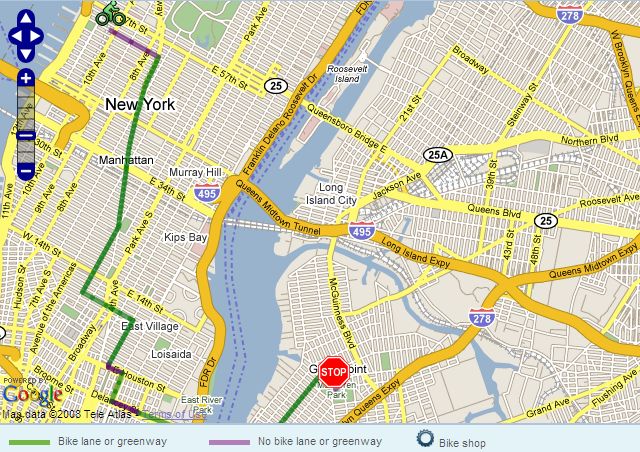 Ride the City route showing the safest way to get from Ars Nova to McCarren Park in Brooklyn.

Streetsblog points out a handy new website called Ride the City that’s beta testing a version of Google Maps integrated with ideal cycling routes. The New York City site lets users plan a bicycle commute from point A to point B in any borough, choosing between the “safest” route along as many bike lanes and greenways as possible, or the “fastest” route which lets you plot the most direct course by bike. All known bike shops along the route also appear on the map.

The site’s creators, who started working on it last year independently of the Google Maps “Bike There” petition, are looking for feedback from cyclists to improve the route selection. Other improvements in the works include a mobile version that would send cycling directions via text message and the addition of any bike parking facilities near a trip's starting/ending point. And more quotes from rock stars like Bob Weir ("Bicycles are almost as good as guitars for meeting girls") seem inevitable.

#best
#bicyling
#bike
#cycling
#google
#map
#maps
#ride the city
#route
#safe
#search
Do you know the scoop? Comment below or Send us a Tip