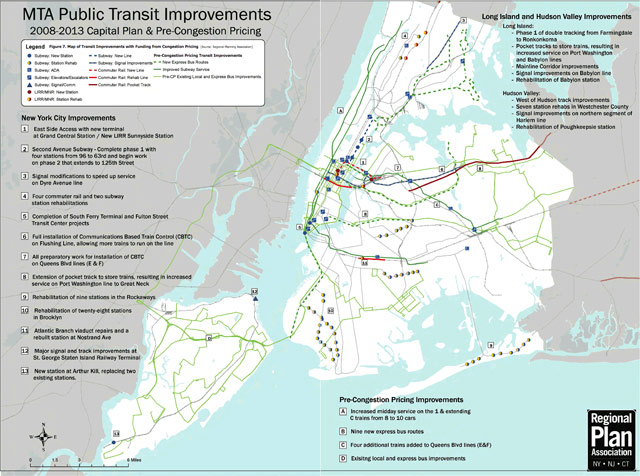 The Regional Planning Association released a map of what service and capital improvements tri-state riders can expect, even in the absence of approval for a congestion pricing plan. NYC Transit riders have a lot to be unhappy about following a fare hike, followed by the announcement that promised service improvements were off the table, followed by the prospect of yet another fare hike and even more service cuts. If Mayor Bloomberg's congestion pricing plan doesn't pass, it's uncertain how the MTA will be able to afford major capital improvements to the system, although a $1.5 billion windfall from the sale of the Hudson Yards should help.

One of the promised improvements--pre-congestion pricing approval--is the completion of phase 1 one of the 2nd Ave. Subway and the beginning of phase 2. Skepticism will be forgiven if some expect this will be the first capital spending plan item to reach the chopping block in a budget crisis, simply using history as a guide. The map is a helpful guide as to what transit riders can expect over the next five years. By 2013, it may serve as a useful report card on regional transit's ability to accomplish its goals.

#capital plans
#congestion pricing
#improvements
#lirr
#metro north
#njtransit
#nyc transit
#service
#subways
Do you know the scoop? Comment below or Send us a Tip
A new Gothamist is coming! We’ve moved comments over to our beta site. Click here to join the conversation and get a preview of our new website.