Map of the Day: Manhattan Housing Still Super Hot (or Not) 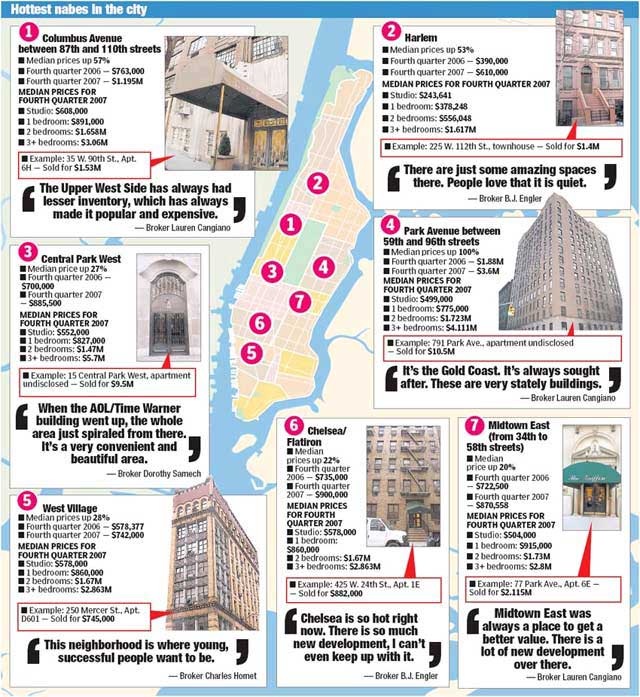 Manhattan real estate sales set a record in the fourth quarter of 2007, with residential sales averaging out to be $1.4 million (according to data from Prudential Douglas Elliman), an increase of 17.6% over 2006's fourth quarter. However impressive that statistic is, the growth was primarily driven by super high-end sales of at least $10 million.

Apparently sales for condos at The Plaza and 15 Central Park West helped drive the average condo sale prices by $500,000, according to other reports, to $1.85 million. In fact, chief economist for Brown Harris Stevens and Halstead Property Gregory Heym tells the Post that "when the two buildings were factored out, average condo prices only jumped about 13 percent."

The Post has this map of some hot Manhattan neighborhoods. This sexy news comes as many are predicting flat or a down year for city real estate ahead. Euro Pacific Capital president Peter Schiff tells the Sun, "I expect a huge collapse in Manhattan real estate, with apartments in New York City losing 90% of their value in terms of gold." Why? Because "The dollar is a deceptive way to measure the value of any asset, because the dollar itself is losing value, so prices have to rise just to stay constant." The Sun even has a chart of "Manhattan Real Estate Prices in Dollars and Gold"!

Other interesting stats: Median prices for 2-bedroom apartments in Park Slope, Fort Greene, and Clinton Hill have dropped 4-14% in the past year. Apartment prices on one part of Park Avenue grew 100%, but prices on the same stretch on Fifth Avenue dropped by $1 million.