Map of the Day: Increases in Voters from Ethnic Groups 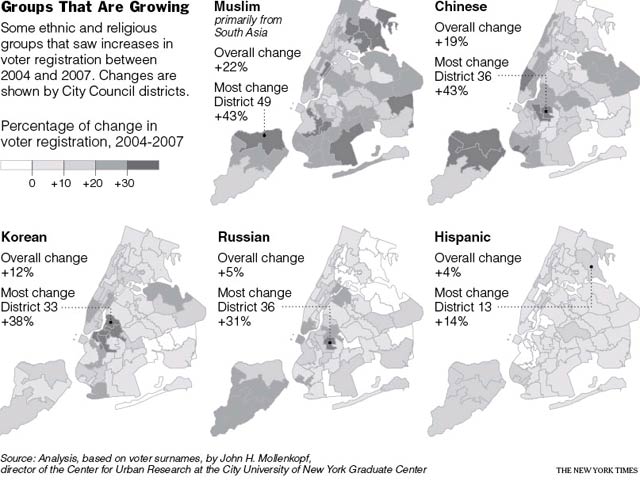 The NY Times has a feature on the changing face of the city electorate, finding that "New immigrants accounted for at least one-third of the increase in the number of New York City voters since 2004, while the number of Irish, Italian and Jewish voters, who together represent the traditional core of the city’s political establishment, decreased slightly." Which suggests that strategies used to win certain City Council districts or other elected offices may not succeed during the 2009 election year.

One political consultant tells the Times, "What you’ll see is a district-by-district, block-by-block struggle for votes. The ethnic mosaic has become that much more colorful and complicated as the once-solid bloc of ethnic voters in the city became more diluted.” Another said candidates will need to make their "on-the-ground outreach" "ethnic-specific," since there are many different nationalities lumped under the "Latino" or "Asian" designations."

And New York Immigration Coalition's executive director Chung-Hwa Hung said of his organization's plan to educate 40,000 immigrant voters, “Remember: All you need are 5,000 votes to win a City Council seat. And that’s well within reach of our electoral machine.”

#demographics
#ethnic groups
#immigrant voters
#map
Do you know the scoop? Comment below or Send us a Tip
A new Gothamist is coming! We’ve moved comments over to our beta site. Click here to join the conversation and get a preview of our new website.