Map of the Day: How Bloomberg Could be President 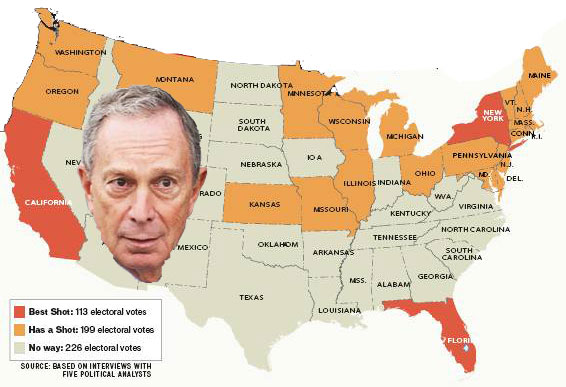 Break out the dry erase board - the Sun looks at Bloomberg's Electoral Calculus by seeing how Mayor Bloomberg could potentially make a play for the White House next year. The Sun created a map (for space purposes, we put Bloomberg's head in the states he doesn't have a chance to win) and explains, "Under the right circumstances, Mayor Bloomberg has the potential to win 312 of the country's 528 electoral votes, well more than the 270 votes needed to win the presidency. A billion-dollar campaign could target the 23 states experts say are in play for him."

There's a website to draft Mike Bloomberg - Unite for Mike.