Map of the Day: Chronic Absenteeism in City Schools 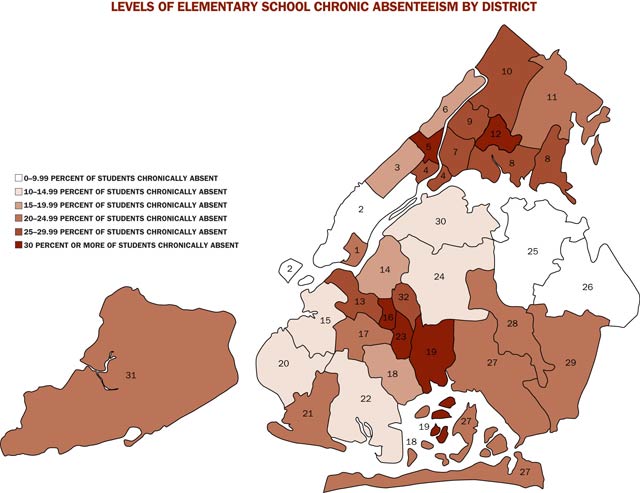 The New School's Center for New York City Affairs issued a troubling report finding that "more than 90,000 children in grades K through 5 (more than 20 percent of enrollment) missed at least one month of school." And, "In high poverty neighborhoods, the number was far higher, approaching one-third of primary grade students." You can read the whole report here--PDF--but here's an excerpt from the executive summary:

There are many reasons for high rates of chronic early-grade absenteeism: health issues such as asthma, transportation problems (particularly for children with disabilities), and dislocations caused by eviction or traveling between homeless shelters. There are issues of family instability, such as a mother’s depression or illness. Absences are also associated with cultural issues such as language barriers, and with problematic family priorities, including extended family vacations during the school year. The schools themselves bear a responsibility for attendance, both in their attention to the issue and in their efforts to create welcoming places where children want to be and that parents respect and value.

Addressing these issues directly, alongside absenteeism, may not only improve school success in the long-term, but also strengthen families and improve the quality of many children’s lives.

The report notes that some schools in high-absenteeism districts have come up with ways to address the matter, by working with other community groups and trying to reach out to families or "seek[ing] intervention when problems are dire." The Bloomberg administration's report card grading system only values attendance as 5% of the total grade, "often masking serious problems," as the NY Times puts it. But the Bloomberg administration has also encouraged the schools and social agencies to share resources to help families and children.

Principals are responsible for student attendance, and the deputy mayor of education Dennis Walcott tells the Times, "You are going to have pockets of students and pockets of schools that have high rates of absence, and we can’t be afraid to go after that. Those principals will be held accountable for that. At the same time, I think as a system you see that there are schools that are very attuned to their attendance needs.”