The 2014 Super Bowl will be held in East Rutherford, NJ on February 2nd because NYC never got a West Side Stadium. The host committee say 400,000 people are expected for game-related events—and 80,000 on game day—so they are pushing a lot of mass transit options, like a special "Fan Express" bus and a NJ Transit "Super Pass." To help guide them in style, here's a beautiful NJ-NY mass transit map. 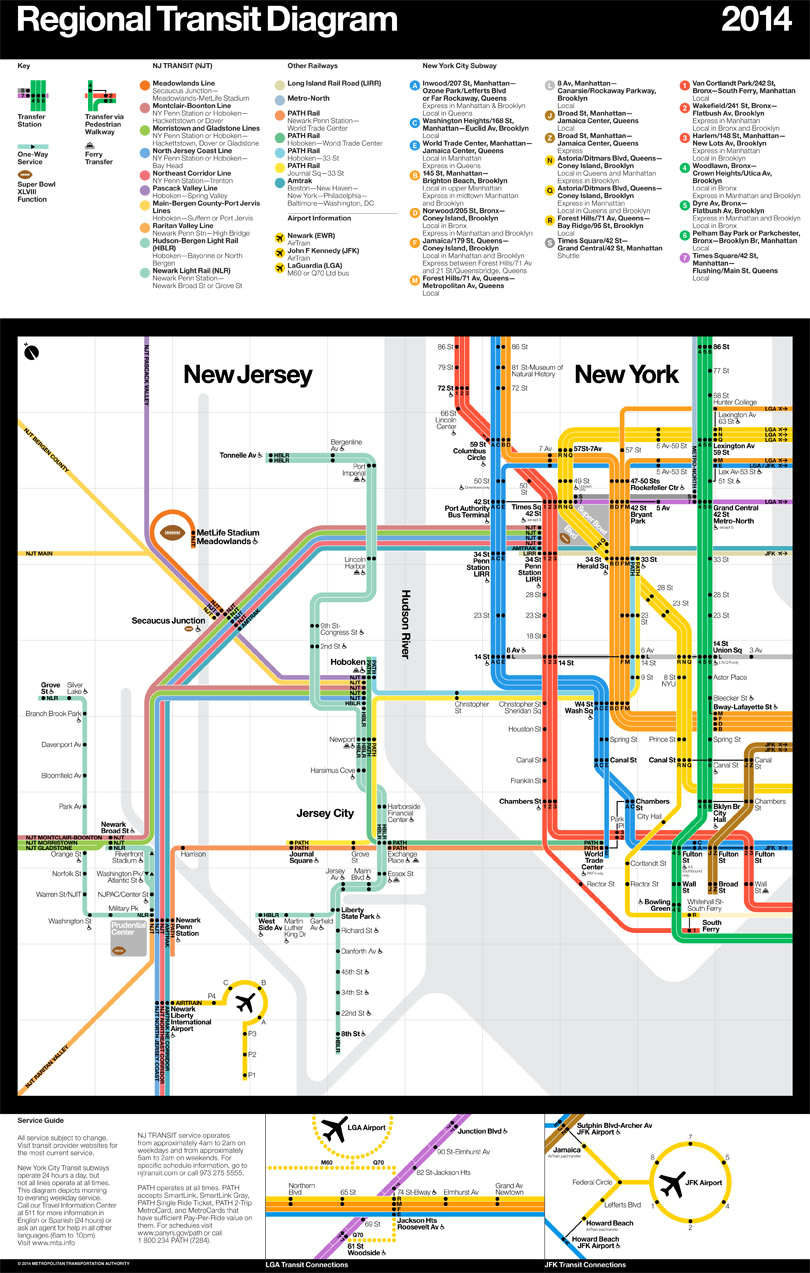 The MTA notes, "The diagram shows all interconnections between the regional transit services, and highlights with a football icon those areas where Super Bowl -related events will occur on both sides of the Hudson River. The diagram will appear on all transit provider web sites, as well as in Super Bowl web sites, guides, publications, mobile apps, and folding pocket maps to be distributed by the Host Committee." Also, did you know the MTA is making one million commemorative Super Bowl-branded MetroCards (in four designs)?

Here are some other elements of the 2014 NY/NJ Super Bowl's transportation plan:

NJ TRANSIT will offer a commemorative “Super Pass” that provides unlimited rides across the system between January 27 and February 3. The 8-day “Super Pass” will cost $50 and be available to the general public via online orders at njtransit.com/superbowl,
from now until January 20. Guests will be able to use this pass for NJ TRANSIT rail transportation to the game at MetLife Stadium.

To help alleviate traffic congestion, additional lanes will be dedicated to traffic going into NJ before the game, and then will be dedicated to traffic going into NY after the game. For those coming from New York to New Jersey on game day, the Port Authority of New York and New Jersey will enhance its operations at the Lincoln Tunnel with four lanes; just after kick-off, these lanes will be open for those traveling into New York. There will also be dedicated approach lanes for those with priority access NFL placard on their vehicles. At the George Washington Bridge, new Variable Message Signs (VMS) will provide real-time travel information and special traffic advisories. Regular construction activity at the Port Authority river crossings that would affect travel to and from MetLife Stadium during the week of the Super Bowl will be suspended.

New York City Transit will operate rush-hour level service on the Grand Central-Times Square shuttle on the Saturday before the Game. On Game Day (midday), there will be 36 subway trains per hour providing access to Penn Station for game attendees traveling via NJ Transit.