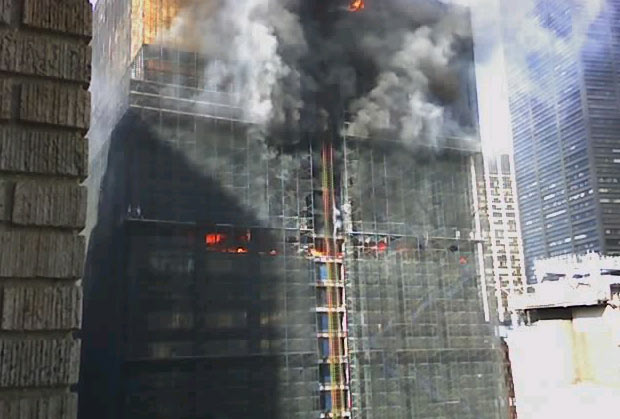 Photograph of the Deutsche Bank tower on fire by Todd Myers

Last year, a seven-alarm fire, started by a construction worker's smoking, broke out at the former Deutsche Bank building. Two firefighters died in the blaze, and now three construction supervisors overseeing in the building's dismantling are expected to face manslaughter charges from the Manhattan DA's office today.

The NY Times points out that the city of New York, "whose numerous failures in safeguarding the building, which was damaged on Sept. 11, 2001, were revealed soon after the fire"—from the Department of Buildings not inspecting the dismantling to the Fire Departments' lack of inspections—"and then exposed in painstaking detail during a 16-month investigation, will not be indicted," because of "significant legal obstacles that would be presented by charging the city," according to sources. 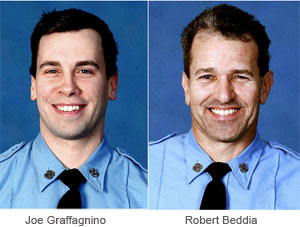 Bovis Lend Lease, the contractor for the job, will not be indicted either; instead, the charged will be two employees of subcontractor John Galt Corp. and one from Bovis. It was later discovered that John Galt. Corp had no experience in dismantling buildings (the Deutsche Bank building had been damaged during the 9/11 attacks) and actually seemed to be a shell company.

The families of the fallen firefighters, Robert Beddia and Joseph Graffignino, had been negotiating with Bovis for a settlement. The Daily News reported Beddia's family agreed to take a $5 million deal, which still allows them to purse civil litigation against NYC, Bovis, and John Galt, but Graffagnino's family rejected the offer.