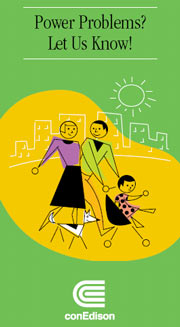 Is Upper East Side the new Queens? Because a series of manhole fires left hundreds of customers (and one customers could mean an entire apartment building of residents) without power from midmorning till late last night. One woman who was without power for over 12 hours complained, "It's terrible if that's how it's going to be. I'm upset with the whole city. Con Ed is becoming a nuisance."

The power outages were concentrated around York Avenue and 78th and 79th Streets, and Con Ed crews were working throughout the day to fix the problem. A short with some wiring apparently caused the manhole fires, so no "lightning caused it" excuse this time.

Con Ed has made over $1.4 billion in improvements to its system, and a Con Ed spokesperson said, "Generally speaking, the networks are more reliable than [any] delivery system that exist anywhere in the country." Still, many Queens politicians, still bitter about last year's blackouts, question Con Ed's ability to meet the summer demand. The utility says "We are absolutely ready for the summer."

Graphic on Con Ed's "Power Problems" pamphlet (PDF); we truly have no idea why drawings are happy they have power problems.

#con ed
#east side
#lightning
#manhole
#News: NYC
#queens
#Upper East
#upper east side
#york avenue
Do you know the scoop? Comment below or Send us a Tip