With the L-pocalypse now just eleven months away, the MTA and the Department of Transportation are inviting the public to voice their concerns about the looming shutdown in a series of town hall meetings, giving New Yorkers the opportunity to shout a wide range of grievances in the general direction of transit officials for sixty seconds at a time.

The Manhattan leg of this listening tour (paired with a Brooklyn version next Wednesday) took place in the West Village on Wednesday evening. In a New School auditorium, a packed crowd of mostly local residents lined up to grill DOT Commissioner Polly Trottenberg and New York City Transit President Andy Byford about the coming disruptions to their neighborhood, and to demand answers to a host of questions left unresolved in the contingency plan released by the two agencies.

That plan calls for an exclusive busway on 14th Street during still unspecified "peak hours," additional bike lanes in Manhattan and Brooklyn, the creation of a new bus network in both boroughs, and HOV restrictions on the Williamsburg Bridge. Transit planners and advocates say that a more ambitious approach will be necessary to accommodate the 225,000 displaced daily L train riders, and many have called for a full closure of 14th Street to private vehicles during the 15 month shutdown. Most of those in attendance on Wednesday, however, presented an alternative view.

"What they need to do is to come up with a plan that's not so focused on transporting commuters where they need to get," said David Marcus, a West Village resident and founding member of the 14th Street Coalition, a group that advocates against bus priority and is currently suing the city to halt the tunnel repairs. "Nowhere do you hear how they're addressing the dire needs of the communities that are going to be impacted by the overflow of traffic from 14th Street."

Marcus also told Gothamist that he is "totally against" the proposed two-way bike lane on 13th Street, claiming it's "part of an agenda for a car free Manhattan" advanced by people who don't live in the borough. 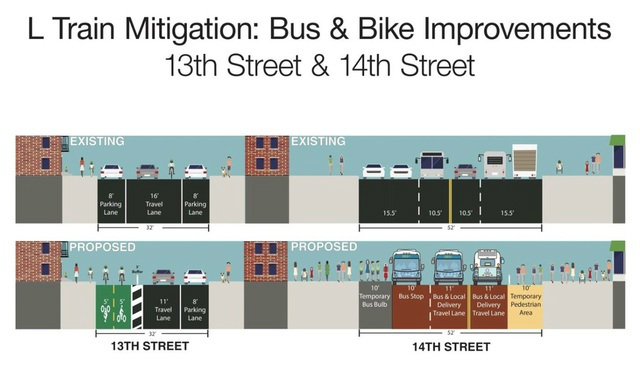 That dichotomy between Manhattan residents and commuters—and a near-pathological rage toward the city's cyclists—featured heavily throughout the town hall. "What are you going to do to train these inexperienced bikers, so I don't get myself killed?" asked the first questioner, an elderly West Village resident who admitted that he rides the L train about once a year. His question was greeted with thunderous applause, as was the next question, also aimed at the treacherous bike lanes, and at least a dozen others that followed in the same vein.

The jeering audience seemed unconvinced as Trottenberg repeatedly explained that the plan's goal was to lessen reliance on single occupancy vehicles, and that an increase in cycling could actually benefit those living adjacent to 14th Street. "On streets that we install bike lanes, we actually see crashes and conflicts go down," she told one parent, who was concerned about a bike lane appearing in front of her daughter's school. According to an analysis released by the DOT in 2014, pedestrian injuries decreased by 22 percent in places where protected bike lanes were installed, while crashes with injuries were reduced by 17 percent.

A good deal of the night's anger was also reserved for the city's 14th Street bus plan, which will require a car-free zone between 3rd and 9th Avenues during certain times of day, as the corridor is transformed into the busiest bus route in the country. "I'd like to know what you're going to do about the pollution, not only to my health but to the health of our beautiful buildings," said Michelle Golden, co-director of the Flat Iron Alliance, a neighborhood advocacy organization.

In response, Byford said that the agency was rolling out a fleet of electric buses as part of a three-year pilot program, but admitted that most of the new buses will be "clean diesel." Of the 200 new MTA buses being added for the shutdown plan, only 15 will be electric.

Notably cheerful since arriving from Toronto last year, the new NYC Transit Chief seemed to lose a bit of his pep as the night wore on, telling one attendee that a new bus route through lower Manhattan was "the best of a bad lot," and sternly informing another that the city was not under any obligation to conduct an environmental impact assessment ahead of the repairs.

"At the end of the day, a good plan has the flexibility to go both ways," he said to a local resident upset about the potential vehicle restrictions. "It could be scaled back if we find that we've actually laid on too much provision, or if it's too impactful."

Despite the event's focus on minimizing disruption to 14th Street, a few questioners did press the officials on expanding the scope of the plan. Referring to Mayor de Blasio's recent comments that a 24/7 bus priority on 14th Street goes against "common sense," Phil Leff, a Brooklyn resident, urged the agency heads to reconsider that conclusion. "The mayor has obviously not been on the L train at midnight on a Friday or Saturday," he said. "It's as crowded as rush hour."

"This idea that you only need the busway during rush hour doesn't make sense," echoed Peter Kaufman, who lives in Brooklyn Heights. "If you're going to allow other traffic on 14th Street during off hours, the idea that when the magic hour strikes all those cars sitting there are going to magically vanish and the buses are going to have a clear shot is ridiculous. It'll just be the status quo."

"That's a pretty cynical, selfish group of people in there," he added on his way out. "They're living in a fantasy land."