Subway turnstile jumpers will no longer face criminal prosecution in the borough of Manhattan starting this fall, under a new initiative from Manhattan District Attorney Cyrus Vance, the DA announced this morning.

Vance announced in a press release this morning that his office "will no longer prosecute the overwhelming majority of individuals charged with Theft of Services for subway-related offenses, unless there is a demonstrated public safety reason to do so," starting in September of this year.

Instead of arresting people for turnstile jumping, Vance said his office will work the NYPD and the Mayor's Office of Criminal Justice to institute a system of issuing summonses in lieu of arrests and pre-arraignment diversion for anyone arrested while jumping a turnstile. If arrestees complete the diversion program, Vance said his office will decline to prosecute them in criminal court.

"Since 2010, my Office has worked with the NYPD and the Mayor’s Office of Criminal Justice to end the criminal prosecution of tens of thousands of low-level cases that needlessly bog down our Criminal Court and swell our City’s jail population," Vance said in the press release announcing the policy shift. "In Manhattan, we are embracing the role that District Attorneys must play to achieve the closure of Rikers Island, and proving that New York can safely reduce crime and incarceration at the same time." Vance now says his office is on track to reduce low-level offenses prosecuted in Manhattan criminal court by "nearly half" of the 2009 total. 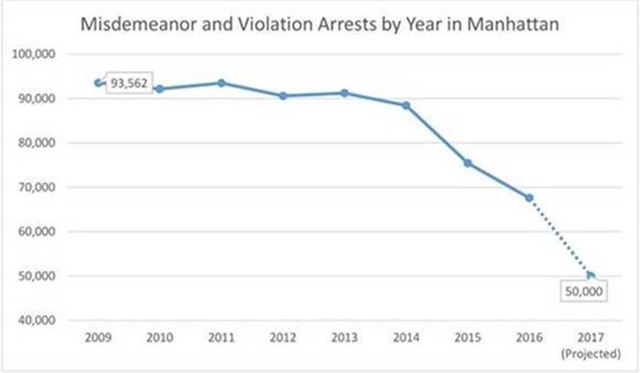 A graph released by Cy Vance's Office showing a decline in low-level arrests in Manhattan.

Vance stressed that "individuals who pose a demonstrated threat to public safety" will still face criminal prosecution if arrested for turnstile jumping, although the press release didn't clarify what the standard is for determining who poses a public safety threat. A spokesperson for Vance's office told Gothamist that the office will take things on a case-by-case basis.

The change in how turnstile jumping will be prosecuted comes at a time when the city's reliance on Broken Windows policing is under fire because of its impact on New York's low-income non-white community and the possibility that it could undercut New York's efforts to be a sanctuary city. Earlier this year, Police Commissioner James O'Neill admitted that a "theft of services" arrest (the legal code name for turnstile jumping) could in fact lead to an immigrant getting deported. And earlier this month, a series of bills the City Council passed last year encouraging the use of civil summonses instead of arrests for quality of life crimes like public drinking, public urination and littering went into effect.

"The decision by Manhattan DA Vance to end most criminal prosecution of fare evasion in Manhattan is an important step forward to reforming our criminal justice system," Council Member Rory Lancman, a longtime critic of Broken Windows policing, said in a statement. "For too long, prosecution of fare evasion as a crime has disproportionately impacted people of color, bogged down our courts, and even put immigrants at risk of deportation. Diverting fare evasion cases away from the criminal justice system is a smart and sensible policy that will ensure offenders are held accountable fairly, while not saddling people with a lifetime criminal record or left languishing in custody."

Other Broken Windows critics were more measured in their response to the policy shift. "We are happy that after more than six years in office, the Manhattan District Attorney has finally listened to the people of New York City and acknowledged the profound harm caused by prosecuting low-level cases like fare evasion in criminal court,” Nick Malinowski, Civil Rights Campaign Director at VOCAL-NY said in a statement. "However, we know the harm begins the moment the handcuffs go on, and ultimately it falls to the Mayor and the NYPD to eliminate all arrests for fare evasion and to provide a transportation system that is accessible to all New Yorkers, no matter how much money is in their wallets."

#cyrus vance
#fare beating
#manhttan da
#turnstile jumping
Do you know the scoop? Comment below or Send us a Tip