It appears that Manhattan District Attorney Cyrus Vance, Jr. is gently reminding his constituency why they elected him. The timing—when his office is under scrutiny after the "Rape Cop" verdicts, the Deutsche Bank fire acquittals, the departure of the sex crimes unit chief, and the disintegrating rape charges against Dominique Strauss-Kahn—is anyone's guess. But we received an email from Cyrus Vance Jr. earlier today with the subject line "Manhattan District Attorney Cy Vance in the news."

The email, sent from his campaign staff, itself kindly directs us to "Joe Nocera, in today's NY Times Op Ed page, covers the latest events surrounding the District Attorney's office," and what happens to be the title of Nocera's piece? "The D.A. Did the Right Thing." 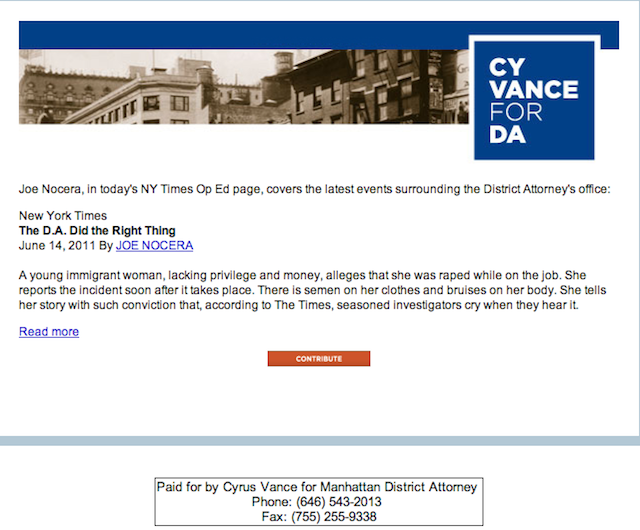 Nocera's column (which is incorrectly dated in the email—it should be July 4, 2011, and not "today's NY Times" but "yesterday's") praises Vance for his actions:

...Vance should be applauded: a woman with no power made a credible accusation against a man with enormous power. He acted without fear or favor. To have done otherwise would have been to violate everything we believe in this country about no one being above the law.

Even the way the case appears to be ending speaks to our more noble impulses. Vance didn’t dissemble or delay or hide the truth about the victim’s past. He did the right thing, painful though it surely must have been.

Vance's campaign flacks couldn't have put it better, so why try? Sure Vance is a politician so these email blasts are to be expected. But he's a good year and a half away from another campaign: why now? Is he worried about a possible recall? (We called his campaign office, but no one was available for comment.)

To balance out this propaganda, here's some spin from the other side, courtesy of a reader: