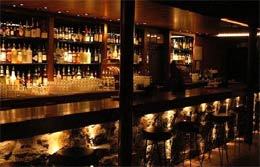 Mr. Black, a club at 643 Broadway (near Bleecker) was raided early yesterday morning. Thirty-two people were arrested, including 17 employees, on charges ranging from suspicion of drug possession and suspicion of selling drugs. Apparently many bags of cocaine and ecstasy were found.

DJs Are Not Rockstars have a weekly gig at the club. Paper magazine has called the club a "downtown, gay hotspot." And the MySpace page for Mr. Black says it's "where anyone and everyone is welcome, where anything and everything goes, where the atmosphere is charged, the crowd unpretentious, and the music unexpected."

And seven people were wounded (6 were shot, 1 was stabbed) at a "lingerie party" in Jamaica, Queens. Revelers in their late teens and early 20s had gathered at the old Church of Christ on Rockaway Boulevard when a "screaming match escalated into violence."