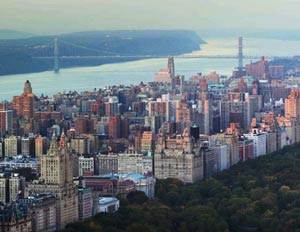 The Manhattan real estate market was more expensive than ever during the first quarter according to reports from real estate brokerages. There were "record" highs for Manhattan, in sharp contrast to what the rest of the nation's housing market is going through.

However, there are some mitigating factors: Though the median prices of apartments has risen to $917,000 from $840,000, that's because three times as many apartments over $10 million sold during this first quarter, versus last year's, helping boost the average. Still, studio apartment prices have increased 22% to $490,000 and one bedroom prices were up by 12% to $669,000, per Corcoran's data.

The brokerages disagree on sales volume: Prudential Douglas Elliman saw a 34% drop, while Halstead only showed a 1% decline and Corcoran saw a 5% sales increase. They all pretty much believe there will be a slowdown--which could be worse if Wall Street's woes continue. Corcoran's president said many Bear Stearns execs have called about selling their homes and a few have put their homes on the market.

#apartment prices
#economy
#manhattan
#real estate
Do you know the scoop? Comment below or Send us a Tip
A new Gothamist is coming! We’ve moved comments over to our beta site. Click here to join the conversation and get a preview of our new website.