A man was restrained by police after brandishing a sword at the Apple Store on Fifth Avenue today.

Video shows the man sitting on the landing of the staircase, waving the sword:

Police confirmed the incident occurred at 3:55 p.m. when the man entered the store and displayed the sword.

Customer Luis Apolo, 18, was at the store, waiting for a Genius Bar appointment, when he saw the man carrying what he thought was a stick (the sword was covered). "I was sitting right under the stairs when he started talking loudly to one of the employees," Apolo recalled. He says the man "got mad," took the sword out and "started swinging" it towards people on the staircase at the center of the subterranean store.

Apolo said he then got on his knees and "tried to stab himself" while on the landing. "He got on his knees and started counting up from one to ten, and then people started backing up, fearing he had a bomb," Apolo told us. After trying to "puncture" himself, the man went upstairs, where police tackled him. Now "everything is calm" at the store, according to Apolo. 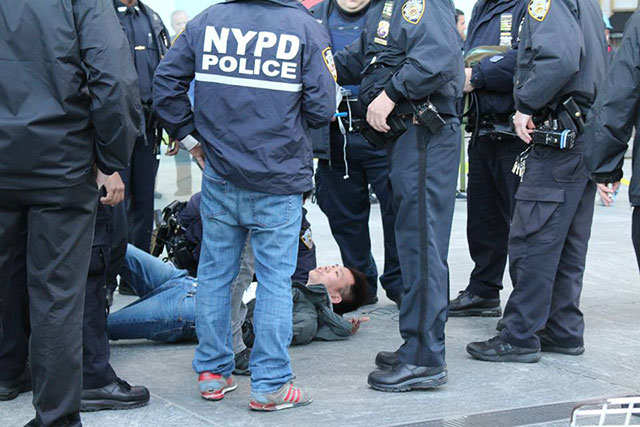 An NYPD spokesman said store security immediately confronted him, and police responding to the scene subdued him. EMS took him to Bellevue Hospital in stable condition. No one was injured and no charges have been filed at this time.

#apple store
#manhattan
#sword
#original
Do you know the scoop? Comment below or Send us a Tip