Pigeons are a facet of New York City life that are so ubiquitous that you probably wouldn't even notice if one or two or a dozen of your neighborhood flying rats went missing. Which seems to be the theory a man wandering around Greenpoint is counting on, considering that earlier this week he was seen snatching up pigeons in a huge net. And sadly, it's probably not because he's just a very eager pigeon trainer.

According to CBS2, at least one witness saw a man place down birdseed as a lure on a Greenpoint street, lunge at the pigeons who came to eat it with a big butterfly net and then quickly take his net full of pigeons into a van. The anonymous witness' account is corroborated by surveillance footage from the area, which shows the net-wielding man leap off the screen and re-appear with a net full of squirming birds. Other footage from the same block, taken at the same time, shows startled birds flying away from something, but the actual trapping of the birds wasn't caught on camera.

"It’s obvious that he knew what he was doing was wrong, and he was probably doing something kind of nefarious with the pigeons and that’s why he didn’t want to be caught," the witness told CBS.

She was right to assume the man was up to no good, since as we went over that time someone was suspected of stealing all the pigeons from Washington Square Park, the birds are most likely brought across state lines to Pennsylvania, where they're used as live target practice. Pennsylvania is one of the few states that still allows the birds to be used as live target practice according to CBS. Even if the man didn't have a nefarious end for the pigeons, it's still illegal to trap the birds in New York City without a permit.

Last year, a similar-looking man from the CBS story was seen stealing pigeons off the street in the East Village, before throwing the squirming bag of birds into a van:

The practice of illegally trapping pigeons became enough of an issue that people put up flyers decrying the practice, one of which a tipster sent Gothamist in 2015: 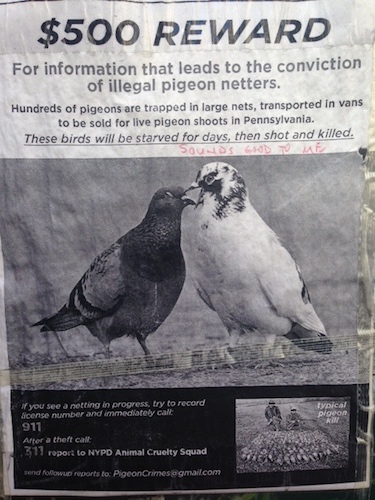 One thing I know for sure: This dude better pray that Mike Tyson doesn't catch him stealing pigeons.

#animal cruelty
#greenpoint
#pigeons
Do you know the scoop? Comment below or Send us a Tip