Man Who Stole $1.2 Million In Wine From Goldman Sachs CEO Falls To Death From Carlyle Hotel

A former personal assistant to the CEO of Goldman Sachs who got caught stealing $1.2 million of his boss's vintage wine was found dead on Tuesday afternoon. Nicolas De-Meyer fell to his death from the 33rd floor of the Carlyle Hotel, according to the NYPD.

Police responded to a 911 call just after 2:30 p.m. about someone who jumped from the East 76th Street hotel. They found the 41-year-old unconscious and unresponsive, and EMS pronounced De-Meyer dead at the scene.

According to the NY Post, "Hotel staff had been alerted by his sister that he was sending alarming texts saying he might kill himself over the case, police sources said. When security forced open his door, he was naked and sitting on the window sill. He smiled at them and then jumped, sources said, his body striking a 17th floor balcony with such force that half of him landed on a terrace two floors below, the sources said."

De-Meyer had been expected in federal court to plead guilty to the interstate transportation charge he faced after stealing hundreds of bottles of wine from his former boss, Goldman Sachs CEO David Solomon. The wine included seven bottles of Domaine de la Romanée-Conti, which federal prosecutors described as being considered "among the best, most expensive, and rarest wines in the world." Solomon had purchased those particular bottles for $133,650, according to the indictment. 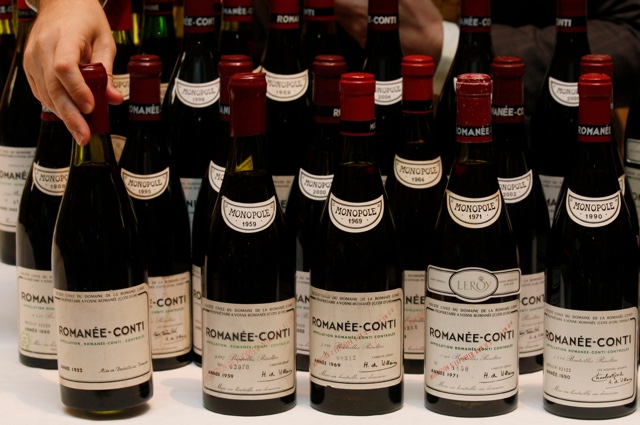 A lot of 55 bottles of "Domaine de la Romanee Conti's Romanee Conti" ranging from year 1952 to 2007, with exception of the 1968, is displaying during the auction preview in Hong Kong Wednesday Dec.7, 2011. (Kin Cheung/AP/Shutterstock)

Solomon is a noted wine connoisseur; a previous residence had a 1,000-bottle wine storage room and he's said to bring his own wine to restaurants. Part of De-Meyer's duties was to handle the transport of the wine to Solomon's East Hampton home. The purloined wines were sold to a wine dealer in North Carolina, who would travel to a NYC apartment to buy wine from "Mark Miller," who was actually De-Meyer.

The theft was discovered in late 2016. After Solomon and his wife confronted him, De-Meyer allegedly admitted to the scam and promised to pay him back. However, Bloomberg News reports that De-Meyer fled the country and spent the next year and change traveling abroad, only to be arrested at LAX in January.

Over the summer, De-Meyer's lawyer had asked for a postponement in the case. He had been on $1 million bond.

In a statement provided to the Post, Solomon said, "Mary and I are deeply saddened to hear that Nicolas took his own life. He was close to our family for several years, and we are all heartbroken to hear of his tragic end."

#carlyle hotel
#david solomon
#goldman sachs
#nicolas de-meyer
#wine
Do you know the scoop? Comment below or Send us a Tip