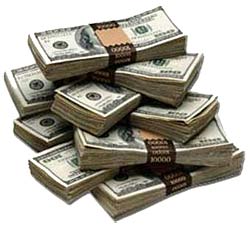 The Brooklyn resident whose name caused him $2.1 million of trouble is still being held at Rikers, but a judge lowered his bail from $1 million to $10,000.

Benjamin Lovell, a Keyspan Energy salesman with a bank account of $400, was dubious when a Commerce bank teller told him he had a $5 million account. But he withdrew $2.1 million after bank officials insisted the money was his. Of course, what really happened was Commerce Bank gave the wrong Benjamin Lovell access to a Delaware company's account.

His Legal Aid attorney told the Daily News, "He didn't intend to steal from anyone. Based on what the bank told him, he really believed the money was his." After Commerce realized its mistake and contacted authorities, only $500,000 of the $2.1 million was found - the rest Lovell blew on "bad investments, jewelry for a girlfriend, dental implants, vitamins and colonics."

In an unrelated article about accidental deposits, U.S. PIRG's Ed Mierzwinski suggests talking to a senior bank official - not just the bank teller or customer service rep. And Consumer Action's Linda Sherry says conversations should be documented and to ask the bank for timing, "I've spoken with people who have done everything they can to give the money back but it's very difficult. You have to leave the money in the account so they can figure out how it got there in the first place."

Lovell, whose family is trying to raise the bail money, will face a grand jury this week. And the News notes though Lovell withdrew $2.1 million up until January, he was arrested on February 6 for "illegally using a MetroCard for the disabled." But he has his sympathizers: A law enforcement source said, "There's not a jury in the world that will convict this guy. Not after he tried to give the money back and the bank blew him off."