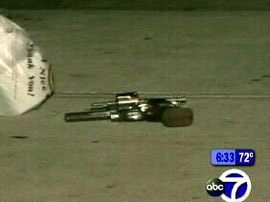 Last night in the Ridgewood section of Queens, a man turned the tables against a pair of men that were allegedly robbing him outside his home at 60-34 Putnam Avenue. Police officials told WABC that the 42 year-old shooter was approached by the two men shortly before 10:30 last night. When they attempted to rob him, he shot them multiple times.

One of the alleged robbers, 31, was shot multiple times and pronounced dead at Elmhurst Hospital. The other man, 32, was shot in the arm and back and is in stable condition. The shooter was being questioned for possession of four guns in his home. Police are determining the legality of the guns - a .22, a .25, a .357, and a .380 - to determine whether they will file charges.

Update: It looks like the story has changed significantly since this morning. 1010 WINS is reporting that the shooter, who originally said he was being robbed, was arrested by the police. They are charging 42 year-old Lilzam Kupih with murder, attempted murder, and criminal posession of a weapon. While Kupih told reporters he was protecting his wife and three children, it's reported that he later told authorities that the victims were trying to extort money from him.

#children
#crime
#elmhurst hospital
#guns
#hospital
#money
#murder
#police
#queens
#The Police
#wabc
Do you know the scoop? Comment below or Send us a Tip