Man Sucker-Punched On LES "Because You Look Like Shia LaBeouf"

This past weekend, Mario Licato had all the makings of a carefree Saturday. He'd met some friends for lunch, then repaired to a friend's apartment in Cobble Hill for the afternoon. Around 8 p.m., he hopped on the F train by himself to go catch a show at Pianos on the Lower East Side. Getting off the train at Delancey Street, he ran into trouble.

"I was walking up the stairs," he remembers. "I had my head down—there were people in front of me—just to make sure I wasn't going to fall."

I didn't even see the guy. I just see his fist coming towards me. It knocked me, and while I was falling down the stairs, all I hear was, "This is because you look exactly like Shia LaBeouf!"

Licato says he lost consciousness when he landed at the foot of the stairs, and when he came to his face was covered in blood, his glasses broken in half. A couple rushed to his aid and asked, "Did you know that guy?"

The couple, according to Licato, described the attacker as in his mid-20s, 6 foot to 6-foot-3, and muscular, like a frat boy. Licato, to the best of his knowledge, did not know the guy. The LaBeouf hater, as Licato says witnesses recounted, was running down the stairs when he punched Licato and kept going, then boarded a train.

Licato said he had difficulty processing what had happened.

I was so confused. I was even more confused because I got up and I was like, am I crazy or did I hear him say, "This is because you look like Shia LaBeouf?" And [the couple] were like, "Nope. That's exactly what he said as he was running away from you." 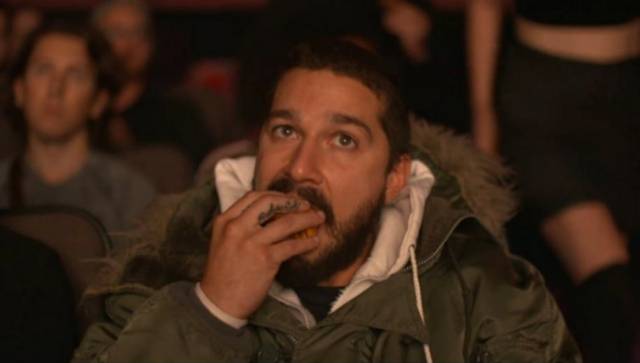 Shia LaBeouf, that time he watched all of the movies he has appeared in consecutively and live-streamed it.

The couple called 911 and helped Licato up the stairs to the sidewalk to wait for an ambulance. One arrived within minutes, but Licato says the emergency medical technicians who stepped out weren't exactly comforting.

They got out of the car and the first EMT guy, while I'm gushing blood from my face, with my broken glasses, just says, "Welcome to New York, buddy."

My response was "Well, fuck you, I’m born and raised here." I was like, "Are you kidding me? You're standing in front of somebody who's bleeding out of their face and that's your first response?"

Licato says that, having broken the ice, the EMTs checked him for a concussion, ruled that out, and told him that he could get stitches for his eyebrow, but that a butterfly bandage would probably hold it just as well. Then, he says, they left, not staying for the police to arrive as EMTs are required to do.

Cops did arrive, and Licato says they were helpful, questioning him for what little information he could provide, and canvassing people around the station. The whole process took about an hour, and once the officers left, Licato took a cab home to Bushwick, night ruined.

Licato works as an art director in advertising, and said that he couldn't get out of working a shoot on Monday. His bruises, he said, are "changing color by the hour," he has developed numbness in his left nostril, and yesterday morning he woke up with one eye turned red. A coworker warned the people on the job before Licato's arrival.

"It's not super cute," Licato said of his condition.

The attacker may have cursed when making his declaration of LaBeouf hatred. (NYPD)

The responding officers told him they would look into the EMTs' alleged dereliction of duty, though it is not mentioned in the police report. Also missing is a physical description of the assailant, but Licato said the cops sounded confident that they would be able to pull surveillance video from the subway station. An FDNY spokesman said the department has not received a complaint related to the incident.

And what of Licato's alleged resemblance to LaBeouf? Has he gotten that before?

"So many times," Licato said. "That's why I knew I wasn't that crazy. I got it three years ago. I've been stopped on the street before, at least 10 times in my life."

The attack is still deeply perplexing.

"I wanna know what Shia LaBeouf did to him," Licato said. "What did Shia LaBeouf do to him that he punched somebody that looks like him? He must have did something so mean. Did he steal his girlfriend? Did he just see his last performance art piece?"

#anti-labeoufism
#assault
#Lower East Side
#mario licato
#nypd
#Shia LaBeouf
#original
Do you know the scoop? Comment below or Send us a Tip