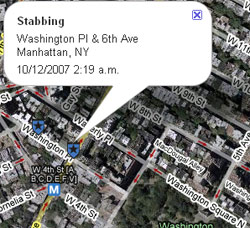 Early this morning, a man was stabbed to death on Washington Place near 6th Avenue in the West Village. Police believe the 43-year-old victim was arguing with other men outside 123 Washington Place when the attack occurred around 1:40AM.

The victim was stabbed at least once in chest and was pronounced dead at St. Vincent's Hospital. The police are looking for two men who fled the scene.

The neighborhood tends to have a bit of foot traffic, even at 1:30AM, given the number of bars and clubs around and the proximity to Washington Square Park, the NYU campus, and the West 4th Street subway station. Through October 7, versus last year, felony assaults are up 21%, murders are up by 100% (from 2 to 4), burglary is down 28.6% and grand larceny is down 6.2% (PDF).