Authorities are seeking two women for allegedly attacking an A train rider who stepped on their foot.

The incident took place on Wednesday, August 22nd, around 12:10 p.m. in Inwood. According to the NYPD, a 24-year-old man on a northbound A train "mistakenly stepped on the foot" of a woman, and then a second woman "became irate and began a verbal dispute with the victim." 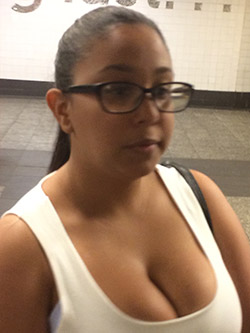 When the subway got to the 207th Street station, the two women allegedly tried to block the man from leaving the train. Police say he was able to leave, but "the dispute continued in the mezzanine" and when the man was trying to leave the station, the first woman started to hit him with her purse while the second woman "displayed a box cutter and slashed the victim's lower left back and right arm."

The suspects fled, while the victim was taken to Allen Pavilion Hospital, where he was treated for two lacerations.

The NYPD released an image of the first woman (pictured, right), describing her as being about 25-years-old, 5'7" and 150 pounds with a medium build, long brown hair and brown eyes. She was last seen wearing a white tank top. The second woman is described as being around 40-years-old, 5'5" and 150 pounds with brown hair and was last seen wearing a purple shirt.

Anyone with information in regards to this incident is asked to call the NYPD's Crime Stoppers Hotline at 1-800-577-TIPS (8477) or for Spanish, 1-888-57-PISTA (74782). The public can also submit their tips by logging onto the Crime Stoppers website or by texting their tips to 274637 (CRIMES) then entering TIP577. All calls are strictly confidential.