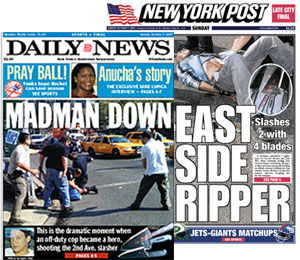 A homeless man was shot in the stomach by an off-duty transit police officer after he stabbed two people randomly in Murray Hill yesterday afternoon. The assailant, identified as 38-year-old Lee Coleman, was wounded and is in serious condition; he was charged with attempted murder, assault, and criminal possession of a weapon.

Coleman's rampage began around 10:30AM. He first walked into a Starbucks on Second Avenue at 32nd Street and tried to take knives from behind the counter. The Post reports that the Starbucks' employees confronted him, so he "he left without incident and walked north up Second Avenue." Then, he went into a deli where the Daily News says he got into an argument with someone there, and then headed to the Texas Smokehouse BBQ, which is between 34th and 35th Streets. He asked to use the bathroom, but instead grabbed four knives from a counter.

Chef Amarjit Singh tried to stop him, but Coleman slashed him on the head. Singh ran outside and Coleman went to Second Avenue as well, where he came upon 67-year-old Susan Barron, a psychologist who was walking her dog. Coleman then knocked her to the ground and started to stab her. A source told the News that Coleman was slashing her "'like a piece of meat...He had so many knives that he had to put some down on the ground' while he stabbed her with others." The Post wrote, "He hacked away at her arms and face, leaving several slash wounds that cut to the bone." 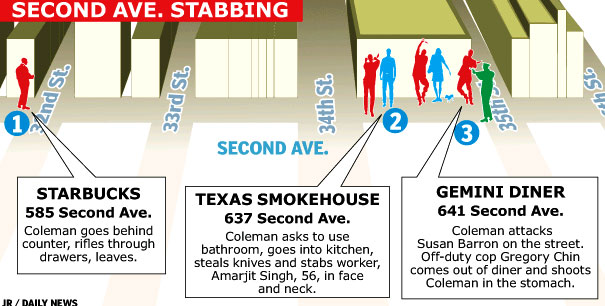 Around that time, off-duty transit cop Gregory Chin was leaving the Gemini Diner. He saw the attack and yelled for Coleman to drop his weapons. When Coleman didn't, Chin shot him in the stomach. Coleman was still fighting after being shot, and two police officers as well as two bridge and tunnel officers, helped Chin restrain Coleman.

Singh is in serious but stable condition. Even though he was injured, he brought out towels to help Barron. The Daily News' Michael Daly says we should be proud of Singh: "Onlookers then watched Singh ignore his own wounds as he sought to stem the woman's bleeding."

Barron underwent surgery yesterday; her niece said she expected her aunt to be fine, "Nothing was hit, no vital organs." Barron, a psychologist who also runs support programs for the parents of blind children, is a breast cancer survivor who is described as being "very intelligent, very vivacious." The Times reports that Barron's dog Velvet was "taken in yesterday by an employee of a North Fork Bank branch that Ms. Barron uses."

Chin was given and passed a sobriety test, which is part of NYPD procedure after a police-involved shooting. He is being called a hero; one witness said, "This guy saved a few lives. He [Coleman] was wrestling like crazy, and it took four policemen to subdue him and get the cuffs on."