A 25-year-old man was shot and killed on East 19th Street between Beverly and Albermarle roads in Brooklyn early this morning. Police marked off where nine shell casings had fallen to the ground around a silver Infiniti sedan. The victim was parked in the vehicle when someone in a black car pulled up around 1:45 a.m., fired the shots, and sped away. Police say the victim was hit once in the chest.

Video obtained by News12 shows a female passenger sprinting out of the car. The victim stumbled out soon after, collapsing at the entrance to the lobby of 165 East 19th Street. Police have not released the dead man's name, pending notification of his family. No arrests have been made.

A neighbor woke to the shots, and when he went to his window, saw the Infiniti's passenger-side door ajar, then heard screams and men's voices saying, "Oh, no!" Paramedics drove the man to Kings County Hospital Center, and doctors there pronounced him dead, but the witness said he believed the man expired on the spot.

"I knew he was dead because [paramedics] didn't do anything," said the neighbor, who would only provide his first name, James. "They just put him on the stretcher, put the gas on his face, and wheeled him out."

James said he had not heard of such violence in his four years at his current home, but that when he lived on the block in the early 2000s, "it was bad." 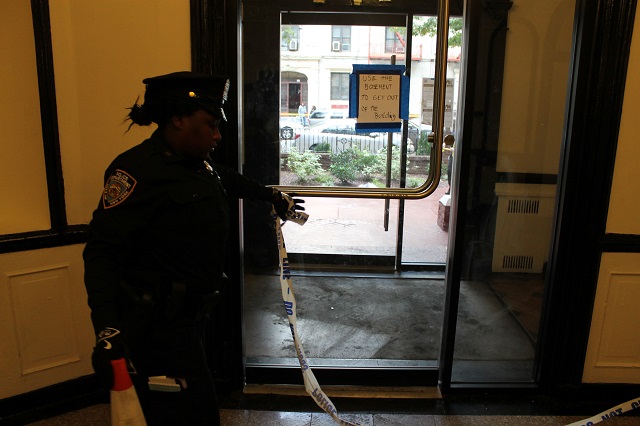 Neighbor Diane Curtis shuddered at the sight of the car window, door, and engine punched through with at least seven bullets.

"That's like an assassination attempt, shooting him that many times through the driver's side door," she said.

Curtis has lived on the block for 11 years and said incidents of violence have made her scared to leave her apartment at night. Police data show that the block was the scene of two robberies and four felony assaults, as well as thefts and burglaries in 2014. The neighborhood's 70th Precinct had 11 murders as of October 4th, compared to 2 the same time last year. Recently, Curtis said she saw FBI agents arresting her neighbors as she left for work early one morning.

"Once I take care of my business, I go inside and don't come out," she said. "I've been telling the building management it's not safe here. I've been trying to move, but it's hard to find affordable housing." 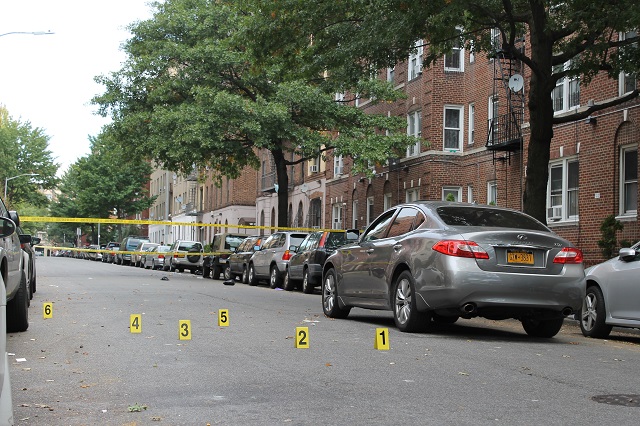 Markers indicate where shell casings were found in the street. More were laid out of sight, under parked cars. (Nathan Tempey/Gothamist)

Neighbor Debbie Meyers left her building this morning to find her car trapped behind crime scene tape, dented by a bullet. She was more concerned about what could have been.

"It's like the Wild West out here...I found parking at around 1 this morning, and [the shooting] happened close to 2," she said. "If circumstances would have been different, it could have been me getting hit."

A woman passing by asked gathered neighbors, "Is this a movie set?"

"No, honey, it's real," one woman said quietly.

Police have identified the victim as Melvin Pippins of Crown Heights.