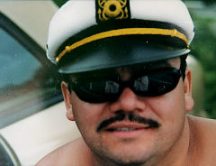 It turns out that the pellet gun-wielding man who police shot Saturday night is a former auxiliary cop. Armando Dominguez had joined the 105th Precinct in 1986 as an auxiliary police officer, but was released for "unknown reasons." Lately, he was having trouble holding down a job and seemed to drink a lot, according to neighbors.

Saturday night, Dominguez was reportedly drunk when he waved around a pellet gun in his Queens neighborhood and frightened people when he said he was going to shoot someone. He also told people he was a cop, and one neighbor told the Times, "He kept going up the street, hiding behind a tree with the gun." When the police arrived, Dominguez refused to drop his pellet gun (which looked very close to an actual gun), so police shot him. The Daily News reported, "Moments before he was shot, Armando Dominguez ignored the guns pointed at him and picked up a dropped police radio so he could pretend to be a cop calling in a drug bust, a police source said."

Dominguez, who was charged with impersonating a police officer and menacing, is in critical condition after being shot in the torso twice and once in the foot. His brother told the News, "I told him many, many times that you shouldn't have that [gun]. I told him that he was an auxiliary cop and that doesn't look good on you. But I'm not at all surprised at this kind of outcome."

As for the police fire, which was reportedly 20 shots: The News says that "five police officers, two sergeants and one lieutenant" opened fire on Dominguez, and many witnesses say that the police asked him to drop the gun repeatedly.

#As
#But I
#crime
#daily news
#fire
#gun
#guns
#news
#people
#police
#queens
#radio
#the daily news
#The News
#The Police
Do you know the scoop? Comment below or Send us a Tip