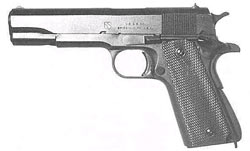 A man who apparently fired at police after a traffic stop in Queens was charged with criminal possession of a weapon. Darnell Routier, a passenger in a livery cab with another person stopped by the NYPD's anti-gang unit at Foch Boulevard and 169th Street in Jamaica on Saturday night, had fled the car and initiated fire. Police returned fire, hitting him in the leg and arm.

Routier is in stable condition at Mary Immaculate Hospital, but his family says they haven't been able to see him. One relative told Newsday there's a police guard outside his hospital room, "All we have heard is that he got shot two times...We can't talk to him and we can't visit him."

Police found a .45-caliber semiautomatic at the scene. The other passenger was arrested, while the NYPD investigates whether the shooting was justified.