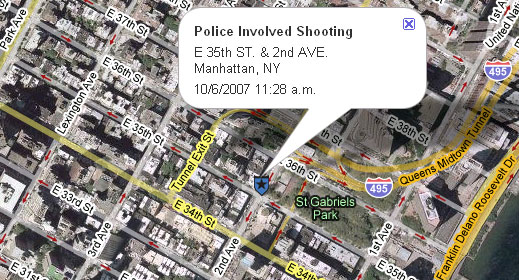 A man was shot after he stabbed two people on a Midtown street. Either an off-duty police officer or plainclothes law enforcement officer is believed to have shot the man. Here's a tip we received:

I walked outside my building about an hour ago and saw tons of police activity. From what I hear a man went into Starbucks to obtain a knife unsuccessfully. Then went into another restaurant (not sure of the name) and obtained a knife. He proceeded to stab two people in between 34th & 35th St on 2nd ave. An off-duty police officer was present and shot the attacker.

It's unclear if the attacker is dead - he and the two victims were taken to Bellevue, where they are in surgery.

Update: The NYPD has revealed some more details. The attacker had gotten into an argument at one store, and that apparently set him off. From WNBC/AP:

Deputy Police Chief Michael Collins said the irate man left the shop, asked to use the bathroom at a nearby restaurant, and then ran into the kitchen and grabbed a handful of large chopping knives.

Then, the slashing started. The man attacked a kitchen worker, who fled into the street. As pedestrians scattered, the crazed man ran down the block in pursuit of his fleeing, blood-covered victim.

An Associated Press editor who was passing by in a taxi, Patrick Rizzo, saw what happened next. With a running tackle, the man knocked down an elderly woman who was out with her Scottish terrier and began chopping at her with one of his knives.

"He brought his right arm up and down like he was swinging a sword," Rizzo said.

The attacker is in critical condition. The woman, who is 67, was stabbed on her arms, face, neck and abdomen; she has undergone surgery, her status is unknown.