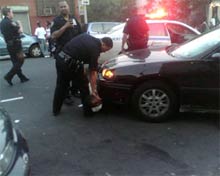 Today's allegation of police brutality comes from 20-year-old demolition worker Raphael Jefferson, who's planning to sue the city after police allegedly "slammed him down on a car hood, repeatedly struck him with a baton and Maced his eyes" while he was handcuffed on a Bronx street on June 20th.

Like last month's videotaped police beating, this one also comes with video, recorded from a bystander's cell phone. The Post says the video shows police officers cursing at bystanders and calling Jefferson a "faggot," and one officer can be seen "wiping the sole of his foot either on or near the Harlem man's pants." (The sample video on the Post website doesn't show any of this.)

Jefferson was arrested for disorderly conduct and resisting arrest after he "became irate" when police stopped him for drinking alcohol on the street. Asked for comment, an NYPD spokesman pointed out that Jefferson has a rap sheet that includes arrests for drugs and burglary.